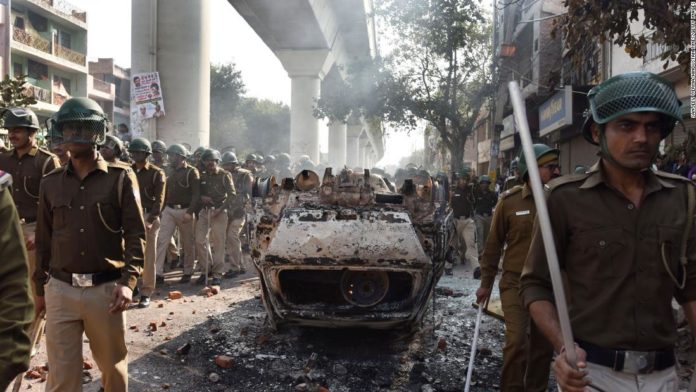 The unrest erupted in parts of New Delhi on Monday, several hours ahead of the arrival of US President Donald Trump, who is in India on a two day state visit.
Police deployed tear gas in affected areas, as protesters hurled stones and set numerous vehicles and a gasoline pump on fire, according to police. The violence took place in East Delhi, approximately 11 miles from where Trump is holding talks with Indian Prime Minister Narendra Modi Tuesday.
Arvind Kejriwal, Delhi’s highest elected official, tweeted that the violence was “very distressing” and requested that “peace and harmony” be restored.
As of Tuesday morning, 90 people were in hospital with various blunt force and bullet injuries, according to Dr Rajesh Kalra, an official at East Delhi’s Guru Tej Bahadur Hospital. Seven men have been declared dead, including a police officer who died from a bullet injury to the head.
For months, Indians have been protesting over the controversial law, which gives Indian citizenship to asylum seekers from three neighboring countries — but not if they are Muslim. A number of people have died as part of the ongoing clashes.
Opposition parties say the law is unconstitutional as it bases citizenship on a person’s religion and would further marginalize India’s 200-million strong Muslim community.
The government, ruled by the Hindu nationalist Bharatiya Janata Party (BJP), said the law seeks to protect religious minorities who fled persecution in their home countries.
There has also been pushback from indigenous groups in northeastern states, who fear that giving citizenship to large numbers of immigrants would change the unique ethnic make-up of the region and their way of life, regardless of religion.
The latest bout of violence comes as Trump visits India for the first time as US President, a much anticipated event intended to bolster US-India relations.
There were no signs of further protests in the capital on Tuesday, where Trump is holding formal talks with Modi and his administration, followed by a state banquet at the ornate Rashtrapati Bhavan, the official presidential palace, in the evening.
Police spokesman Alok Kumar said police had taken continuous action and that “force has been deployed” throughout affected areas Tuesday in a bid to quell signs of further unrest.
Trump has not commented on the violence, but American officials have previously expressed concern about the citizenship law, and have suggested that the President would raise the issue with Modi during the trip.
In remarks made yesterday during a rally in the western Indian city of Ahmedabad, Trump made broad references to India’s history as a pluralistic democracy, noting it’s a country where people of multiple faiths “worship side by side in harmony.”