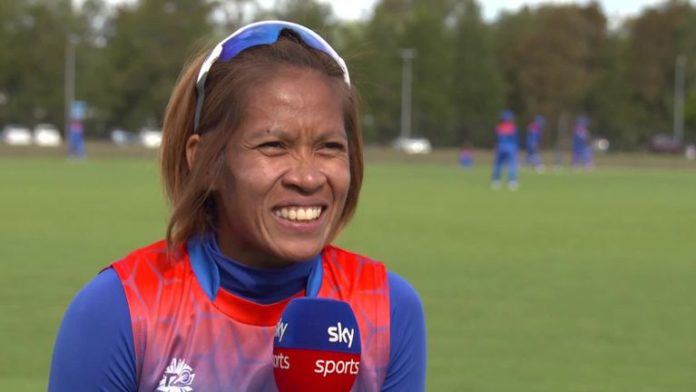 Watch England vs Thailand in the Women’s T20 World Cup, live on Sky Sports Cricket from 3.30am

Thailand women’s cricket team are preparing for their biggest game ever, their “goose” game, according to captain Sornnarin Tippoch.

Thailand are arguably the story of the Women’s T20 World Cup in Australia, given their remarkable rise to their first major ICC tournament.

Though ultimately well-beaten by the West Indies in their opening game, losing by seven wickets, the Thai team did briefly threaten at an upset when reducing the Caribbean side to 27-3 when chasing 79.

Now their next opponents are England, who themselves are eager to register their first win of the tournament after a disappointing loss to South Africa on Sunday.

“It’s the goose game, the big game for us,” said Tippoch ahead of Wednesday clash, live on Sky Sports Cricket from 3.30am.

“We’ve been waiting a long time to play a game like this and it will be great for us.

“We lost in 16.4 overs [to the West Indies]. We lost because we didn’t bat well. We scored only 78 runs, but we tried to get more. But we have confidence with our bowling and fielding.

“We want to play the best cricket, we want to win but, if not, we must learn. Experience is key for us.”

Experience is indeed key for the emerging cricketing nation, who made their international debut only 13 years ago in 2007.

Tippoch was originally a softball player before switching her attention to cricket, a story typical of the country’s cricketing beginnings as they borrowed from other sports.

But, Thailand team manager Shan Kader says the investment in cricket-playing provinces in the country and academies is beginning to pay off, culminating in qualification for this T20 World Cup being achieved with a top-two finish in the Qualifier held in Scotland last summer.

“We first started off with a lot of softball girls, volleyball, basketball, hockey – a lot of transition sports – be we knew, in order to be sustainable, we had to grow our own crop of talent,” said Kader.

“We gradually started slowing building our own cricket players, through the provinces and academies – that’s how we feed our national set-up – and from three provinces initially, we’re now at 14.

“There’s now Under-15, Under-19 teams too, boys and girls, as well as the senior teams.

“Then in 2017, 2018, that’s when we really made a push towards, if we wanted to be playing quality cricket, we needed to be training at a higher intensity

“That’s where the head coach comes in, he has been instructing us, giving us good advice and good feedback on where we should be training and what levels of intensity.”

The head coach appointed back in November 2018 was Harshal Pathak – a former first-class cricketer from India – who helped oversee Thailand’s qualification for the Women’s T20 World Cup.

Pathak says the next aim is overseeing a significant improvement in the country’s batting, while adding that his ambition for the tournament itself would be a top-four finish from the five-team group stage – ensuring an automatic spot in the 2022 World Cup.

“The first priority was our approach. I put a lot of emphasis on playing the game in an aggressive way – batting, bowling and fielding,” said Pathak. “Our motto has been ‘aggressive on the field, positive off the field’.

“We’ve worked a lot on the tactical aspect of batting, in particular, as we need to get that up to speed quickly. In women’s cricket, having a strong batting side makes a difference.

“In the next two or three years, I’d love to see the Thailand team be a strong batting unit, able to compete with all the leading nations.

[What would a successful World Cup look like?] “It would be great to be an automatic selection in the next World Cup [finish in top four of group]. Right now I am looking at that.”

Watch England vs Thailand in the Women’s T20 World Cup, live on Sky Sports Cricket from 3.30am.