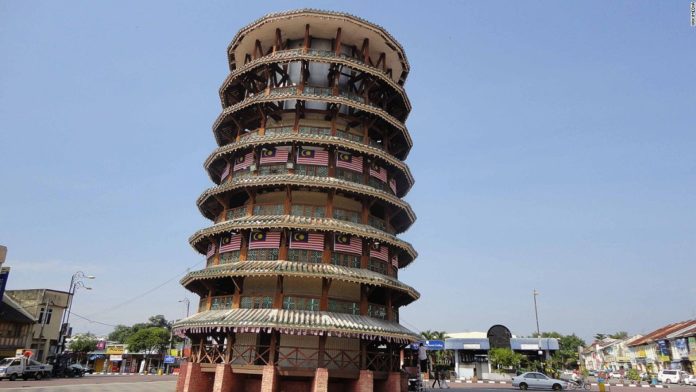 Written by Georgia McCafferty, CNN
From the Tower of Pisa in Italy to Britain’s Big Ben, some of the world’s most famous buildings have a distinct list. However, architectural leanings are not confined to history.
A few modern buildings — like the 541 foot (165 meter) Montreal Tower, whose 45-degree lean makes it the tallest tilted building in the world — are intentionally inclined, but those that lean without design are a property developer’s nightmare.

The 189 foot (58 meter) Demidov Tower — better known as the “Leaning Tower of Neviansk” — in Russia has an obvious lean. The top of the tower is tilted 7.2 feet (2.2 meters) from the center, an incline of approximately 3 degrees. Credit: Wikimedia Commons

Although most slanted skyscrapers are safe, people don’t want to live in them as leading civil engineer John Burland explained to CNN Style,

“If residents know their building is leaning, they’re not going to be very happy — unless of course it’s leaning so much that they can charge people to go up it,” says Burland, an emeritus professor in engineering at London’s Imperial College.

Burland designed the solutions that stabilized the Tower of Pisa and Big Ben.

The reason why some buildings develop a lean, and how such problems can be corrected, is a complex area of geology and engineering called geotechnics. CNN spoke to Burland to unravel the science of foundations and find out why he likens Pisa’s lean to children building blocks on carpet.

Dedicated to the Indian God Lord Shiva, the leaning temple of Huma is thought to have been constructed between 1545 and 1560 and is part of a larger shrine, whose different parts lean to different sides. It is not known whether the temple’s lean is intentional or a result of its soft riverside foundations. Credit: Wikimedia

CNN: Given our modern understanding of the earth and access to technology, why do buildings still end up leaning?

Burland: “We are very sophisticated in our analysis now, but we still have to understand how mother nature works.

“Mother nature lays down ground in all sorts of variable ways and unless you actually spend the money and the time investigating the ground properly — and employ people with good knowledge and experience — then you can run into big problems.”

Recognized by Guinness World Records as the tower with the highest degree of tilt in the world, the 90 foot (27.4 meter) bell tower of this church in Germany has a 5.2 degree inclination. Although the building was built in the mid-1200s, the tower wasn’t added until 1450. Credit: DAVID HECKER/DDP/AFP/Getty Images

CNN: Are leaning towers a common problem and are they safe?

Burland: “They’re relatively rare but I think when you are dealing with towers you do need to be extra careful because they reveal themselves in a way that a lower building wouldn’t.

A low building may settle a bit more at one end than the other, but most of that can be taken up within the building’s structure.

Most of the leaning buildings I’m involved with are not unsafe but selling space in a building that has been known to be leaning is very difficult because often the leaning is caused by some defect in construction or design.

The trouble with a tall building is that you can see it leaning, which people don’t like. It might be safe, but the owners of the building are not going to be at all happy.”

1/31 – Twisting tall towers of the globe

The Council of Tall Buildings and Urban Habitat (CTBUH) has released a comprehensive list of the world’s twisting tall buildings that are either completed or under construction. From Shanghai to Dubai, CNN takes a look at these spectacular spiraled skyscrapers, as well as some of the other tallest buildings in the world. Credit: courtesy GORPROJECT

CNN: What are some of the foundation issues that can cause a tower to tilt?

Burland: “The ground may have softer or weaker spots which you haven’t detected. There can be unexpected geological faults, or you may not have gone deep enough with your ground investigation.”

Built 900 years ago, this mosque is better known by locals as al-Hadba’ — or the hunchback — due to its tower’s distinct tilt. The 150 foot (45 meter) minaret is one of the few original elements of the medieval Nur al-Din complex, which has been placed on the World Monuments Watch due to its risk of destruction. UNESCO is working with the Iraqi government to safeguard the icon. Credit: KARIM SAHIB/AFP/AFP/Getty Images

CNN: Looking at modern buildings, are the geotechnical problems that occur more the fault of mother nature or human error?

Now a famous local tourist attraction, this slanted brick and wood tower is 84 feet (25.5 meters) tall and was originally used as a water tank and — thanks to the large clock on its top — a time keeper. The weight of the water and the soft ground beneath the tank have caused it to lean to the southwest. Credit: Wikimedia

There’s this clause in most contracts about unforeseen ground conditions, which is designed to protect contractors. But if it’s unforeseen then the ground investigation, or its interpretation, has not been adequate.”

The fantastical Nationale-Nederlanden building in Prague — or “Fred and Ginger” as it’s colloquially known — was designed by American architect Frank Gehry to have an intentional lean. Credit: Wikimedia

CNN: How do you stabilize or center a leaning tower?

Burland: “In principle, it’s simple — and that’s the essence of genius isn’t it, simplicity — but actually it requires a lot of expertise.

You’ve got to find out why it’s leaning, so you’ve got to spend a lot of money investigating the ground around the tower (and) what’s happening over time.

The classic solutions involve what’s called compensation grouting or injecting grouting into the ground to try and lift one side of the building compared to the other. It has to be carefully controlled, and it uses very specialized equipment.

Or you can cut the building at its foundation level to insert jacks and jack the building straight, that has been done many times.

At Pisa, because the ground was so incredibly soft, we did the opposite and took some ground out.

But it’s not something you rush into … you can get it terribly wrong if you haven’t got the techniques to do it properly.

Leaning 9.5 feet (2.9 meters) from its center, the “Crooked Spire Church” as it’s also known was built at the end of the 13th century and completed around 1360. Although designed to be straight, it is thought that the lead weights used to cover the spire caused its green timber frame to warp and lean. Credit: Wikimedia/gilibean

CNN: Why was stabilizing the Tower of Pisa so difficult?

Burland: “Pisa is rather special and it becomes highly technical but the best way is to give an analogy.

The ground Pisa is built on is very compressible indeed, and the reason for its leaning can be explained by the way most children will try and build towers on the floor with wooden bricks.

Is this the world’s craziest new skyscraper?

They will know that if you are on a solid wooden floor you can build a tower that’s quite high, but if you start building it on a carpet, you can only get to a certain height and then it starts to lean. However hard you try you can never get higher.

That’s because once the tower begins to move, even a little bit, the center of gravity moves and it drives the tower even more towards the direction that it’s moving.

And that’s the reason why Pisa is leaning — it’s a bit like trying to build a tower on a soft carpet.”

The 184 foot (56 meter) high tower on the Church of Our Beloved Ladies by the Mountain in the German spa town of Bad Frankenhausen was first reported to be subsiding in historical documents from 1640. The tower has listed further to the northeast since that time and is now estimated to have a 4.8 degree lean. Fearing imminent collapse, the German government approved funding for restoration works to stabilize the structure in 2014. Credit: Eckehard Schulz/dapd

CNN: What building do you consider to be the world’s worst titled tower?

Burland: “There is a kind of joy in having the biggest leaning tower in the world … a kind of competition about who’s got the world’s biggest lean, and I think I have a wry smile about it all.

The curvaceous 540 foot (165 meter) tall Capital Gate building is now an iconic part of the Abu Dhabi skyline. Designed by British architects RMJM to tilt 18 degrees to the west — more than four times the angle of the Tower of Pisa — it is recognized as the “furthest-leaning man-made tower” in the world by Guinness World Records. Credit: STR/AFP/AFP/Getty Images

Really, the fact that Pisa Tower is so magnificent and so breathtaking in its architecture — it would have been a world heritage monument even if it wasn’t leaning — I think that’s really what makes it so famous really.

So it’s fun, but none of them are as beautiful as the Pisa Tower.”

This interview was edited for length and clarity.

This article was first published in March 2017 and updated in February 2020.