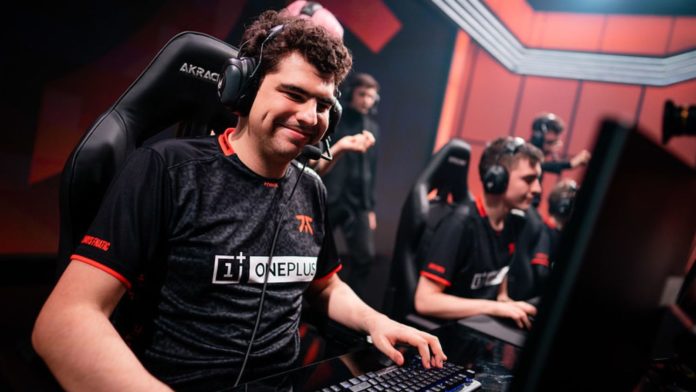 Gabriel ‘Bwipo’ Rau has leapt to his team-mate Zdravets ‘Hylissang’ Galabov’s defence against criticism on social media after Fnatic’s loss to Mad Lions in the LEC.

The Fnatic support went 0/9 on Nautilus in week four of Spring Split and was on the receiving end of a lot of criticism from fans on social media.

Now, his team-mate and top laner Bwipo wants fans to know the loss was down to team decisions, and Hylissang should not take the blame for the result against Mad Lions.

He said: “I’ve seen those comments and I honestly think it’s gross. One thing people don’t really have respect for or recognise, when the game is very much doomed and lost, it’s really hard to come back. Players who refuse to lose are very undervalued and get s**t on more than people who just farm and scale and do fine.

“OG last year were like eight place because they were full of players who just did this. When the game was losing, they were like ‘oh I just want to make sure I have a decent cs, my cs is eight, nine or 10 per minute. I’m not making any mistakes, I’m warding where I’m supposed to be warding.’ But you’re taking any risks, you’re not doing anything and eventually you just lose, and lose and lose. I much rather have someone who goes 0/9 every game trying to win and trying to find plays than someone who’s like ‘I don’t think we can contest this’. This is what frustrates me that people don’t see that.

“Most of the people only get praise when they’re chilling and take a very low-risk play, make it work and look good. A lot of the plays Hylissang takes are pretty high risk and it’s a team thing to make them work, it’s a team responsibility. He gets judged as if he’s alone making these decisions of where and when to fight. We agree with him when we want to fight – he starts it because he usually plays a champion that can initiate.

Hylissang himself has also responded to the criticisms and revealed that he has largely ignored the comments and hate directed towards him on social media.

He said: “I don’t really mind getting slack as long as I’m getting praise when I’m winning. I don’t really read that much of those comments especially when I know I’m not doing well. So, I try to avoid that but I heard people have hated me which I understand. It’s not a good thing to go 0/9 but sometimes it happens. I did make mistakes with my champion and didn’t play him too well – it’s a type that goes in and hopes for the best. The best didn’t happen with me so I died a bunch of times. At least I tried to go and do something rather than lay back and know it’s lost. I think that’s why I died so many times, I don’t mind getting slack when I’m playing bad. Maybe people were too harsh but I don’t really know because I didn’t read it – it happens, what can you do?”