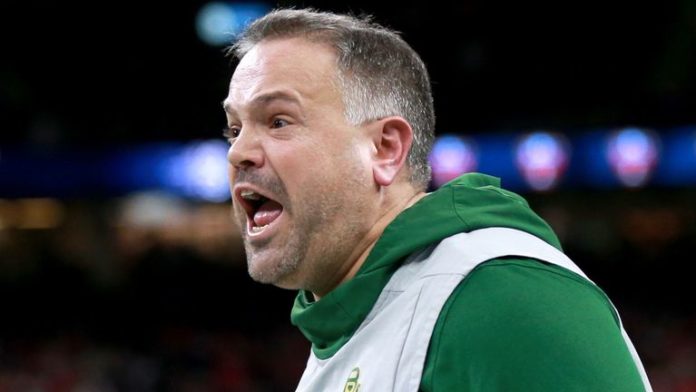 “When Cam’s healthy, he’s one of the best of the best,” Rhule said Tuesday afternoon at the Indiana Convention Center.

“When it comes to Cam, the biggest thing is getting him healthy. I absolutely want Cam here. There’s no doubt about that.

The NFL Scouting Combine returns to Indianapolis this week – we look at what to expect and why it is so divisive.

“From my perspective, I’m unbelievably excited to get a chance to work with Cam. On a personal note, getting to know him. He’s a diligent guy. He’s working extremely hard both in Atlanta and Carolina.

“I’ve really enjoyed getting to know him. For me, the way he balances being a great father, being a great quarterback and the thing he’s done in the community. He’s doing his part, I want to make sure we’re doing our part.”

Newton, 30, had shoulder surgery prior to the 2019 season and spent the offseason overhauling his nutrition and lifestyle choices, but went on to suffer a foot injury in the third preseason game in August at New England.

After attempting to play through the injury, Newton was shut down for the season in September, with Rhule not prepared to estimate Newton’s timeline at this stage in his rehab.

“We need to get him cleared and then we need to have a really disciplined return-to-play program. We haven’t really seen a healthy Cam in maybe two years,” Rhule said.

“I really don’t care if he’s full speed until September. Now, he’s going to tell you it will be sooner than that.”

Stay up-to-date with the latest NFL draft and trade news throughout the offseason.

Financial commitments and a recent pattern of injuries for Newton, plus the change at head coach, led to speculation he could be traded or released.

While those possibilities exist, Rhule repeatedly made it clear Tuesday his plan is to ride with Newton.

The most important next steps for the Panthers, Rhule said, include making sure Newton gets in meetings and has a chance to get acquainted with the offensive system that coordinator Joe Brady plans to install.

Punter Jamie Gillan reflects on his rookie season with the Cleveland Browns and offers advice to the UK’s NFL Academy student-athletes.

Entering the final season of his contract, Newton ominously signalled there could be unrest in his camp.

“I’m so comfortable with being uncomfortable. All I want is a little commitment,” Newton wrote to Instagram without mentioning the Panthers or his contract. “And you can’t give me that?”

Will it stick? We tested Apple’s new MagSafe charger on everything...