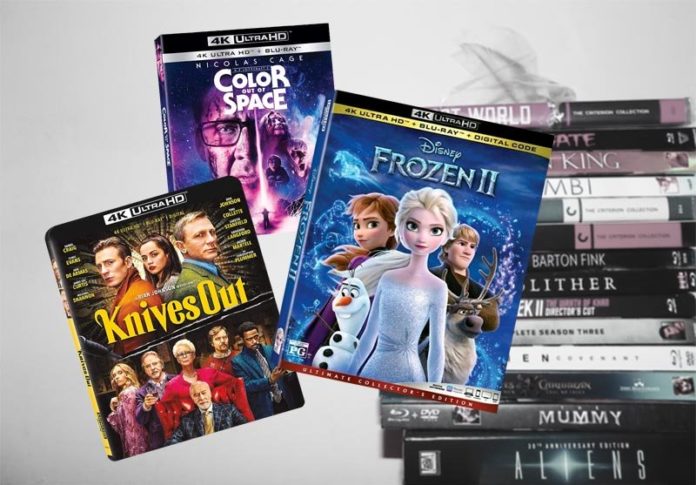 Welcome to ComingSoon.net’s February 25 Blu-ray, Digital HD and DVD column! We’ve highlighted this week’s releases in detailed write-ups of different titles below! Click each highlighted title to purchase through Amazon!

Frozen II
Together with Anna, Kristoff, Olaf and Sven, Elsa faces a dangerous but remarkable journey into the unknown—to the enchanted forests and dark seas beyond Arendelle, in search of truths about the past.

Knives Out
When renowned crime novelist Harlan Thrombey is found dead at his estate, the inquisitive Detective Benoit Blanc is mysteriously enlisted to investigate. From Harlan’s dysfunctional family to his devoted staff, Blanc sifts through a web of red herrings and self-serving lies to uncover the truth behind Harlan’s untimely death.

Color Out of Space
After a meteorite lands in the front yard of their farm, Nathan Gardner (Nicolas Cage) and his family find themselves battling a mutant extraterrestrial organism as it infects their minds and bodies, transforming their quiet rural life into a living nightmare.

The Climbers
The Climbers is a cinematic retelling of the first Chinese climbers to summit Mount Everest. The perilous journey takes its toll on the mountaineers forcing them to make life or death decisions at every turn. 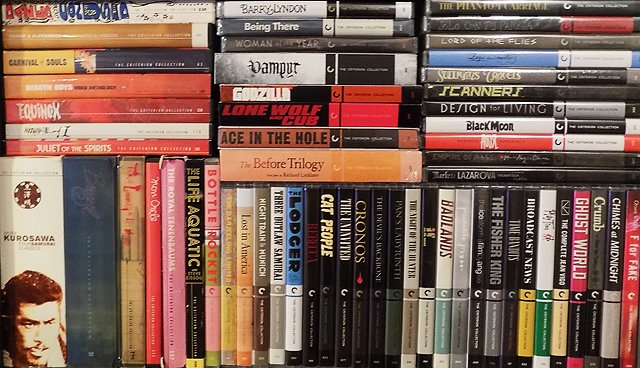 Three Fantastic Journeys by Karel Zeman
A one-of-a-kind silver-screen illusionist, Czechoslovak filmmaker Karel Zeman devoted his career to transporting viewers to realms beyond their wildest imagining. The deft, breathtaking combinations of live-action and animation techniques that he pioneered in the postwar years earned him comparisons to legends such as Georges Méliès, and an array of followers that includes Jan Švankmajer, Terry Gilliam, and Wes Anderson.

Pet Sematary Two
Antagonized by the neighbourhood kids, Jeff befriends outsider, Drew Gilbert, who lives in fear of his cruel stepfather Gus. After Gus shoots Drew’s beloved dog, the boys bury the body in a place rumoured to have powers of resurrection.

One Missed Call Trilogy
An iconic trilogy of J-horror films comes to Blu-ray for the first time! Tapping into the same brand of terror as the Ring and Grudge movies, visionary director Takashi Miike (Audition, Blade of the Immortal) presents a modern, high-tech twist on that mainstay of Japanese folklore, the yurei or vengeful spirit, in the form of its own iconic antihero the terrifying Mimiko.

Victory
Sylvester Stallone and Michael Caine star in this thriller about POWs who, during an arranged soccer game in Paris, plan a daring escape with the help of the French underground.

It Started With a Kiss
No sex, please, we’re on our honeymoon! After a showgirl and an Air Force sergeant head to the altar on the basis of one torrid smooch, the bride begins having second thoughts. After all, marriage can’t be based on sexual chemistry alone.

Hollywood Horror House
Vic Valance (David Garfield) is an enigmatic young man who has manipulated his way into working at the decaying mansion of a once prolific, but now reclusive and alcoholic, movie star named Katharine Packard (Miriam Hopkins). While the rest of the house staff become suspicious of Vic’s intentions, the aging movie queen finds in him a companion and, she hopes, a lover.

XTRO 3: Watch the Skies
A group of military personnel have been assembled to, they believe, locate and disarm old active explosives which have been left unattended at a former army testing site on a remote island. But when they arrive at the deserted island, they soon discover that something doesn’t seem quite right about their mission.

Zombie Island Massacre
A group of Americans, on what they assumed would be a relaxing and fun-filled vacation in the Caribbean, soon find themselves trapped in the island wilderness after their tour bus breaks down.

Mom And Dad (Forbidden Fruit: Golden Exploitation Picture Volume 1)
In the 75 years since its initial release, Kroger Babb’s Mom and Dad has achieved mythical cinematic status. It was a film that, during the height of the Production Code, not only dared to address issues of venereal disease and unexpected pregnancy but presented graphic footage of bodies scarred by syphilis and multiple unobstructed views of childbirth.

Unashamed: A Romance / Elysia (Valley Of The Nude)(Forbidden Fruit: Golden Age Exploitation Picture Volume 3)
In an unusual reversal of the usual exploitation formula—in which scenes of sex, violence, and drug abuse were wrapped in a dire warning of moral degradation—the nudist film took a more positive approach to its subject matter.

Deadly Manor
Whilst en route to a lake, a group of youngsters make an unscheduled stop-off at a remote, seemingly abandoned mansion where they plan to spend the night. But the property is full of foreboding signs – a blood-stained car wreck in the garden, coffins in the basement, scalps in the closet, and photographs of a beautiful but mysterious woman adorning every corner of the house.

La Barraca
First time on Blu-ray produced from a new 4K restoration. This classic is recognized as one of Mexico’s Top 20 movies of all time! In rural Spain, a new family arrives in town to work a parcel (barraca), the townsfolk are very hostile to the idea of another working the land that once belonged to one of them.

The Astrologer
Writer/director James Glickenhaus made his feature debut with this bizarre tale of government skullduggery, satanic killings, zodiacal mayhem and messianic horror.

Mindgames
Maxwell Caulfield stars in this taut psychological thriller from director Bob Yari about a family’s battle for survival against a cruel, scheming stranger.

The Hunt for Red October Collector’s Edition Steelbook (4K)
Based on Tom Clancy’s bestseller, directed by John McTiernan (Die Hard) and starring Sean Connery and Alec Baldwin, The Hunt For Red October seethes with high-tech excitement and sweats with the tension of men who hold Doomsday in their hands.

Years and Years: Season One
Follows a busy family from Manchester with their lives converging on one crucial night in 2019. 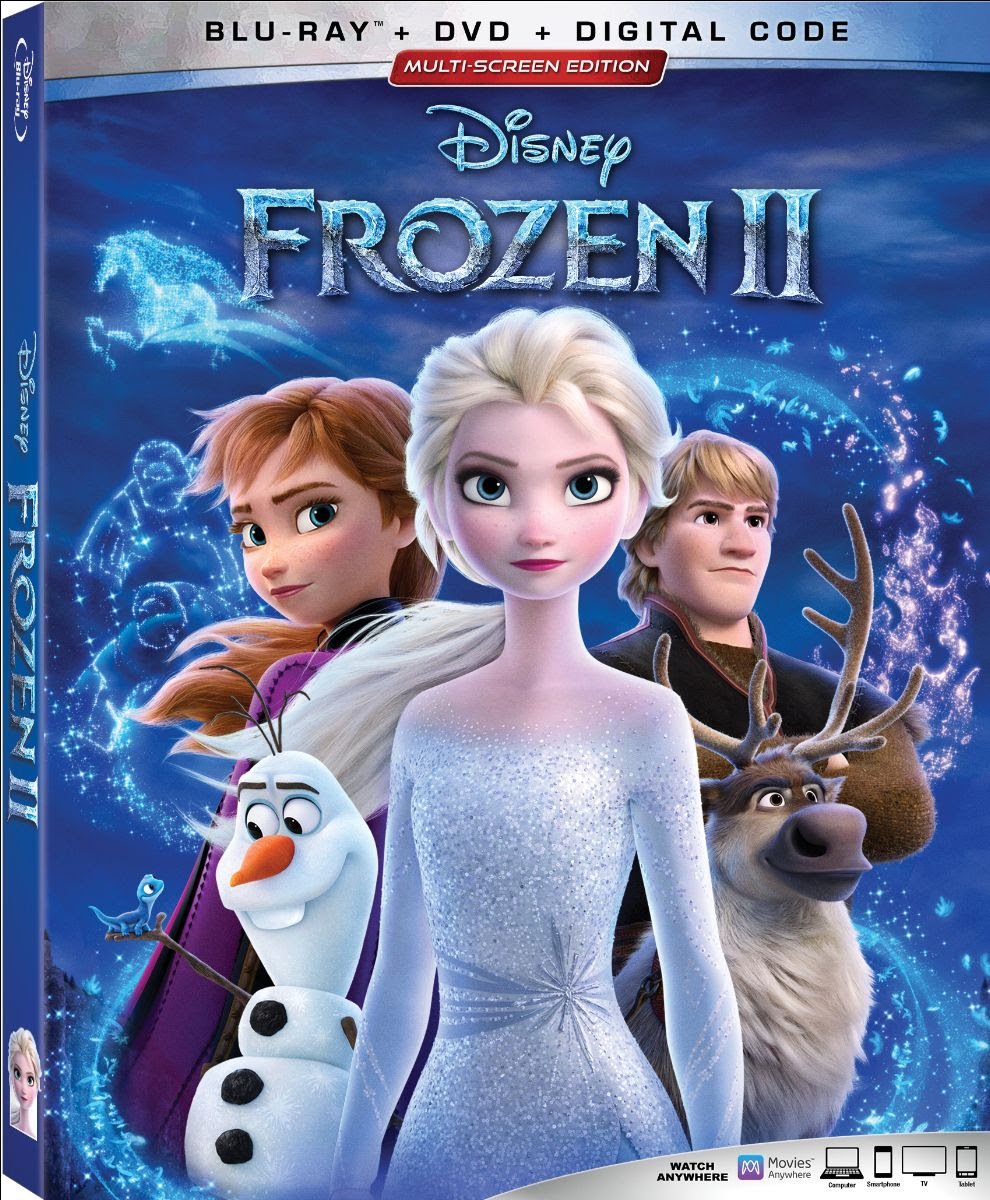