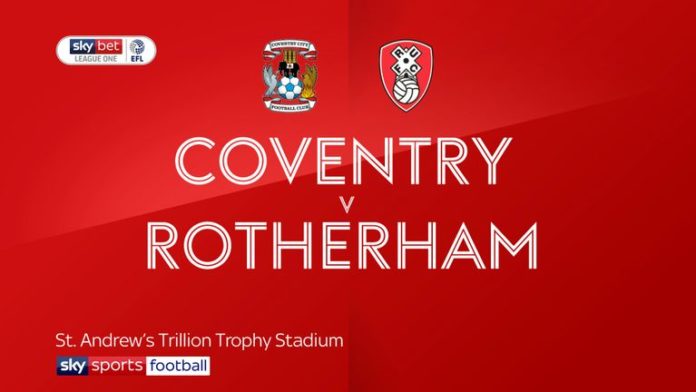 Freddie Ladapo put table-topping Rotherham ahead from Marosi’s mistake but Godden kept the Sky Blues level on points with the leaders and with a game in hand.

Max Power salvaged a point in the sixth minute of stoppage time as his dramatic late strike secured Sunderland a 1-1 draw against Fleetwood at the Stadium of Light.

Power scored with what was effectively the last kick of the game to cancel out Barrie McKay’s early opener and keep the Black Cats in the thick of the Sky Bet League One promotion race.

Portsmouth moved up to fifth with a 3-1 win over MK Dons at Fratton Park. Andy Cannon put Pompey in front early on, before Alex Gilbey turned the ball home on the stroke of half-time after seeing his initial penalty saved.

John Marquis then restored the home side’s lead, before MK went down to 10 men after 86 minutes as Carlton Morris saw red. Marcus Harness sealed the win in stoppage-time.

Matty Taylor and James Henry fired Oxford to a third successive win, as they eased past recent bogey side Accrington 3-0.

Stanley had won on their previous two visits to the Kassam Stadium but United sent them packing this time with a confident display, closing the gap on the Sky Bet League One play-off pack.

Blackpool got their first win since Simon Grayson’s sacking with a dramatic late 2-1 victory over Bolton.

Connor Ronan’s missile handed the lead to the managerless Seasiders, who have reportedly had an approach for Oxford boss Karl Robinson rejected.

Kean Bryan looked to have given the Trotters a point late on, but Kiernan Dewsbury-Hall fired home at the death for the hosts.

Corey Blackett-Taylor’s stoppage-time goal secured Tranmere a first League One victory since December 21 as they left it late to win 3-2 at Shrewsbury.

Mark Ellis and Alex Woodyard gave Tranmere a 2-0 half-time lead before Aaron Pierre and Callum Lang pulled Shrewsbury level. But Blackett-Taylor had the final say as third-bottom Tranmere moved to within five points of AFC Wimbledon.

Substitute Luke Varney scored a late winner as Cheltenham hit back from a goal down to defeat promotion rivals Northampton in League Two.

Varney was brought on in the 81st minute and soon tapped in from close range after Chris Hussey’s corner was not dealt with by the visiting defence.

Grimsby ran out 4-2 winners against Newport in a high-scoring League Two clash at Blundell Park.

Bradley Garmston, Josh Benson, James Hanson and Max Wright all scored for the hosts as they moved above the Exiles into 14th place.