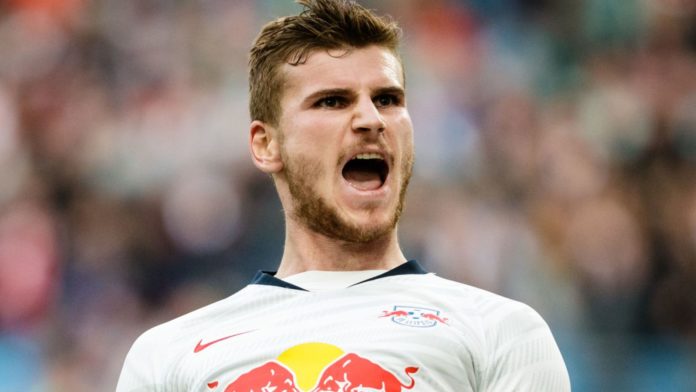 Timo Werner – Is he destined for Anfield?

Werner will become a Liverpool player this summer if Klopp decides to activate his £50m release clause and if he can convince Werner he will play regularly next season.

He is almost certain to leave RB Leipzig in the summer because of his release clause and he favours a move to Liverpool as long as he gets to play.

On the pitch he is letting his performances do the talking. He scored in Leipzig’s Champions League win at Spurs last Wednesday and he was on target again in the 5-0 win at Schalke on Saturday.

That made it 28 goals so far this season for a Leipzig side who are only one point behind Bayern Munich at the top of the Bundesliga.

Leipzig fans expect Werner to leave at the end of the season but a move to Liverpool is complicated because they already have arguably the best front three in the world.

Werner accepts he would have serious competition on his hands at Anfield in the shape of Sadio Mane, Roberto Firminho and Mohamed Salah and to be fair to him he does not believe he is at their level yet.

As was seen last month when Erling Braut Haaland chose to move from Red Bull Salzburg to Borussia Dortmund though, the best young payers are increasingly looking to move to clubs where they are guaranteed to play.

If Liverpool can give his representatives the assurances they need, then Werner playing for Liverpool next season becomes a real possibility.

Clubs such as Manchester United, Chelsea and Bayern Munich also want him but thankfully for Leipzig, all the talk about Werner’s future does not seem to be affecting his performances.

His goal against Schalke on Saturday was a typical Werner goal – cutting in from the inside left channel and finishing with his right foot.

You can imagine him doing that for Liverpool next season – but only if Klopp thinks he is worth £50m and only if he can convince Werner he will play.

Raheem Sterling – City have the money to hold off Real Madrid

The timing was not great. Just days after Manchester City had been banned from European competition for two seasons, Raheem Sterling appeared on the front cover of Spanish sports newspaper AS with a Real Madrid shirt on one shoulder and a City shirt on the other.

Sterling is one of the most high-profile sports stars in the world so it is no surprise that AS and L’Equipe wanted to interview him before a Champions League knockout game between Real Madrid and City.

Do we see a bigger picture if we zoom out though? Is this the first part of a masterplan to move Sterling from City to Madrid? And is that plan being directed behind the scenes by Real Madrid?

After all, it would not be the first time they have used an interview in the Spanish media to get a player to flirt with them.

To his credit, Sterling was diplomatic when he was asked directly by AS if he wanted to move to Madrid one day – “How do I answer that one?” he said. “Is the camera live or is it just taking pictures?”

In the circumstances that was the right thing to say but his future is going to become a big talking point this summer if City lose their appeal at the Court of Arbitration for Sports.

Sterling went on to say he was happy at City but open to challenges in the future. Those challenges will look more tempting if City are out of Europe for two of the peak years of his career.

At 25, Sterling still has time on his side and at City he is one of the best-paid players in the world on a contract that runs to 2023. Eden Hazard did not move to Real Madrid until he was 28 and Sterling is in no rush to leave Manchester.

Why would he? He has developed into the player and the man he is at City and under the management of Pep Guardiola.

Meanwhile, off the pitch, he has recently signed lucrative endorsement deals with Gillette and Pepsi and last year he was second on SportPro’s list of the World’s 50 Most Marketable Athletes.

Those deals will make up for any potential loss of income if City’s European ban is upheld by CAS. The smart money though is on City having at least some success at CAS.

Paris Saint-Germain, AC Milan and Galatasaray have all won significant victories and concessions there appealing against financial fair play sanctions and City will be represented by some of the best sports lawyers in the world.

In public City players are saying the right thing and not rocking the boat. They are willing to wait until the full facts come out at CAS before thinking about their own futures. Some City players though are privately keeping their options open.

One thing is certain though. City are not a selling club and never will be under Sheikh Mansour.

A Champions League ban and the loss of £100m a year in revenue would make it harder but by no means impossible to hold on to players such as Sterling.

As one legal expert said, “City have a good chance of winning at CAS because they are richer than Uefa”.

And they have a good chance of holding on to Sterling because their owners are richer than Real Madrid’s.

The natives are getting restless at Tottenham.

Not all Spurs fans are convinced Jose Mourinho was the right man to replace Mauricio Pochettino but one thing they all agree on is they needed to sign a striker last month.

Long-term injuries to Harry Kane and Heung-min Son have left Spurs without a recognised striker and some fans have had enough.

Eager for an eye-witness report on Werner’s performance I asked a Spurs season-ticket holder if he had been to the game against Leipzig last Wednesday.

Solskjaer giving Ferguson a run for his money

Ole Gunnar Solskjaer has lost 16 games since he became the permanent Manchester United manager 11 months ago.

Questions are asked frequently about whether he is the right man for the job. Results and performances have been inconsistent but off the pitch you have to give him credit for overhauling United’s transfer strategy.

Gone are the days when United would spend over the odds on fees and wages for players who did not really want to be at Old Trafford.

Character is as important as ability now and the five players Solskjaer has signed all look like they will have promising futures at Old Trafford.

Harry Maguire, Aaron Wan-Bissaka, Dan James, Bruno Fernandes and the loan signing of Odion Igalho have improved Solskjaer’s squad and their chances of qualifying for the Champions League next season.

Solskjaer himself was one of Sir Alex Ferguson’s best United signings – just £1.5m from Molde – and two of the best players Ferguson signed were among his first five buys – Viv Anderson, Brian McClair, Mark Hughes, Jim Leighton and Lee Sharpe.

Pannick on the streets of Lausanne

Things have changed. They always do. In the old days if a football club had been found guilty of breaking rules, it may have been a resigning matter.

Not now. These days you appeal, deny everything and issue strongly-worded statements.

Meanwhile the journalists who cover the stories get attacked and threatened online.

Having said that though, Manchester City insist they have done nothing wrong and they are confident they will be cleared at CAS.

Their best signing this season could well be £20,000-a-day lawyer David Pannick who will represent them at their appeal hearing in Lausanne in Switzerland.

Pannick has a formidable reputation which was enhanced last year when he won two Brexit-related cases against the government.

Fans of City – and The Smiths – will be looking forward to seeing Pannick on the streets of Lausanne.