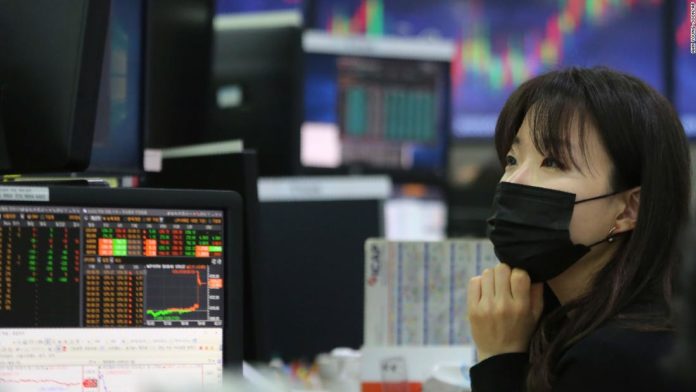 Australia’s S&P/ASX 200 fell 2.2% Wednesday, while South Korea’s Kospi (KOSPI) and Japan’s Nikkei 225 (N225) dropped 1.5% and 1.7%, respectively.
Hong Kong’s Hang Seng (HSI) Index dropped 1.3%. China’s Shanghai Composite (SHCOMP) lost 0.5%.
The declines followed a terrible day in the United States, where the Dow (INDU) finished 879 points, or about 3.2% lower — its second straight day of massive declines. The index has lost more than 2,000 points in total over the past four trading days.
The S&P 500 (DVS) closed down 3%, while the Nasdaq Composite (COMP) fell 2.8%. Futures for all three major US indexes were up about 0.3% in after-hours trading.
Oil prices also tumbled again Tuesday. US oil settled 3% lower at $49.90 per barrel, while the global benchmark Brent crude settled 2.4% lower at $54.95 a barrel. Futures improved slightly during Asian hours.
The death toll from the coronavirus is now more than 2,700 worldwide, with the vast majority in mainland China. There have been more than 80,000 global cases. World Health Organization officials said it’s still too early to declare the novel coronavirus a pandemic — but now is the time to prepare.
Investors and economists, meanwhile, are concerned about how the coronavirus is weighing on global supply chains and major economies around the world. The outbreak could cost China, the world’s second biggest economy, tens of billions of dollars in lost growth this quarter alone. And the disease’s spread to major economies like Italy and South Korea has sparked fears that the problems aren’t going away soon.
The extent of the damage to major industries is also becoming more clear. Virgin Australia CEO Paul Scurrah said Wednesday that the company is experiencing weak demand, an increase in cancellations and a reduction in bookings because of the outbreak. He expected the airline to record a hit of as much as 75 million Australian dollars ($49 million) in the first half of this year because of the virus.
Last week, the International Air Transport Authority warned that the virus’ impact on demand could cost airlines more than $29 billion.
— Anneken Tappe contributed to this report.