Home Sport Smith opens up on pressure as Villa boss 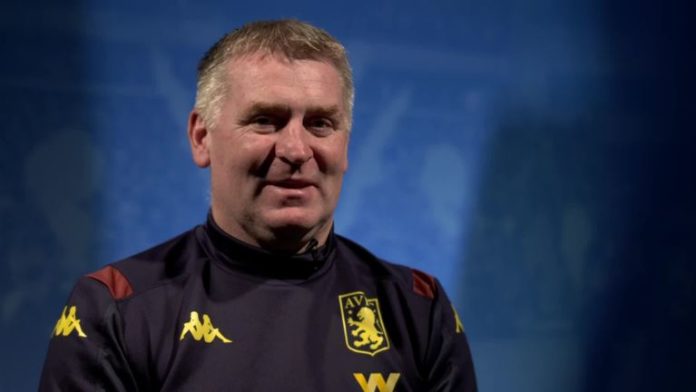 Dean Smith admits he feels more pressure as Aston Villa boss due to his family’s history with the club rather than the expectation to stay in the Premier League.

The 48-year-old is preparing to take Villa to the Carabao Cup final against Manchester City at Wembley this Sunday, live on Sky Sports, in a brief respite from the ongoing battle to avoid relegation back to the Championship.

As a lifelong Villa fan, Smith – who was forced to insist his future was “not in question” after a defeat to Watford in December – says he is aware of the demands upon him but is coping by focusing on getting the best out of his players in every game.

“Being a head coach or manager of Aston Villa, there is always going to be pressure there,” he told Sky Sports.

“I know (former Villa managers) John Gregory and Brian Little, and spoken to them about the pressures that are there, because there is an expectation about this grand historical football club.

“Being a supporter and having a family base that are all supporters of the club, probably the responsibility of being that leader is a little bit more.

“But it has been no different from being in the Championship to the Premier League. I would say the pressure to stay in the league is the same as it was to get promoted.

“I’ve always looked at games that I can’t affect the result. All I can affect are the player’s performances, and if the players perform then they’ve got a chance of getting a result.

“I try and concentrate on what I can control, and once a game has finished I can’t change it. I have to move on and look forward. I’ve been very disciplined in doing that.”

Smith joined Villa in 2018 after impressing in his development of the Brentford team – but he admits he has had to adapt his philosophy in his bid to keep the West Midlands club in the Premier League.

“I’ve learned an awful lot about going into games and thinking you can control the ball,” he said. “With the quality of the players you’ve got, there are periods where you’re not going to have it, and not to go chasing it so quickly.

“I’m one to go and win it back as quickly as possible but some of the quality within this league doesn’t allow you to do that, and when they do beat that press they can get at your back-four or three very quickly, and it gives you problems.

“We’ve had to adapt as we’ve gone through the season but we’ve also lost some big players to injury, which has also made us adapt. But the players and myself have learned all the way through.”