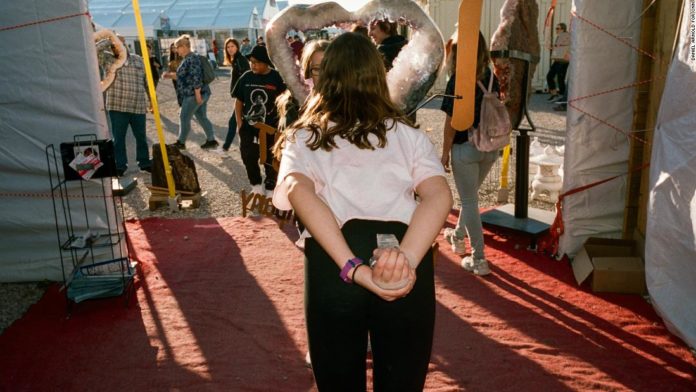 Christian Louboutin is CNN Style’s new guest editor. He’s commissioned a series of stories around the topic of “Journeys.”

Far from the jewelry workshops of Paris and the showrooms of the world’s most rarefied auction houses, a capital of sparkle has developed in the American southwest.

Each winter, some 65,000 visitors descend on Arizona for the Tucson Gem, Mineral & Fossil Showcase to admire and acquire shiny new pieces to brighten up their lives. With thousands of vendors setting up shop and 50 separate shows around the city, it’s less an exclusive experience than a cosmic jumble sale where nothing is too large or too ostentatious to catch somebody’s eye; and nothing is too unusual to lure in curious passers-by.

While diamonds and precious stones hold a place of honor, there’s no shortage of oddities for sale, from animal pelts and skulls to personalized rubber ducks. Over the course of a single day of this year’s showcase, which ran from January 30 to February 14, photographer Daniel Arnold saw a $70,000 geode “the size of a Volkswagen Beetle,” a baby goat being led around a parking lot by a cowboy, and enough tie-dye to rival a Grateful Dead concert.

“A proper, polished gem show takes over the convention center, and the rest of the city becomes Its swap meet parking lot,” Arnold said. “It’s an idyllic post-apocalyptic scene, like a very fun version of the end of the world.”

All photos are from the Tucson Gem, Mineral & Fossil Showcase.

Peter Frampton on his new memoir, David Bowie and overcoming the...