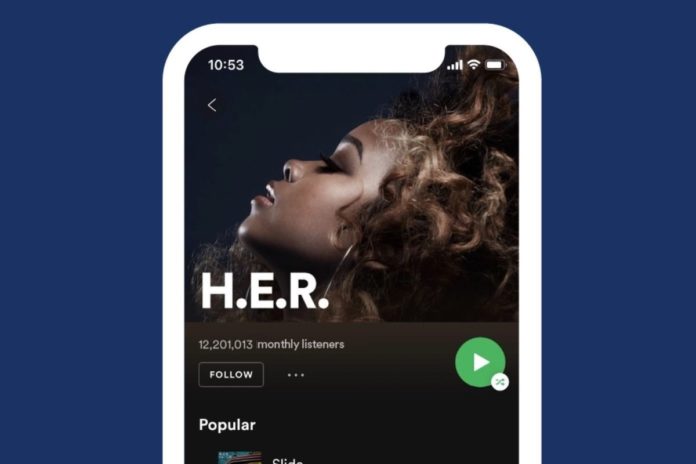 That big green Shuffle Play button on the Spotify app is about to get even more iconic, and I mean that quite literally.

Starting today, Spotify is rolling out an update for the iOS version of its mobile app that swaps the large green button reading “Shuffle Play” with a new icon that does away with the text. The redesign is “coming soon” to Android, Spotify added.

Spotify’s new Shuffle Play button isn’t the only thing changing in the mobile app update. Spotify said it’s rolling out new “Action Rows” that gather such functions as “like,” “play,” and “download” into a centralized row along the center of the screen, rather than up in the top corner where they used to sit.

Meanwhile, the Download toggle is being replaced with a button stamped with a downward arrow—again, very familiar, and minus the text label. Finally, Spotify says it’s redesigned its scrolling rows of tracks, with album art now visible in every view except for the “album” view, while heart icons will now appear next to any songs that you’ve liked.

In a press release announcing the makeover, a Spotify rep said that the mobile app’s new look aims for more of a “global” user experience that relies on “universal” icons rather than words.

“Different languages have different words for these functions, but a single visual indicator can speak to them all,” the Spotify rep said. “As Spotify expands around the world, it’s important that we provide a user experience that is equally as global.”

The best wireless chargers for iPhone

The Easy-On, Easy-Off Shoes to Slip Into When You Need an Escape