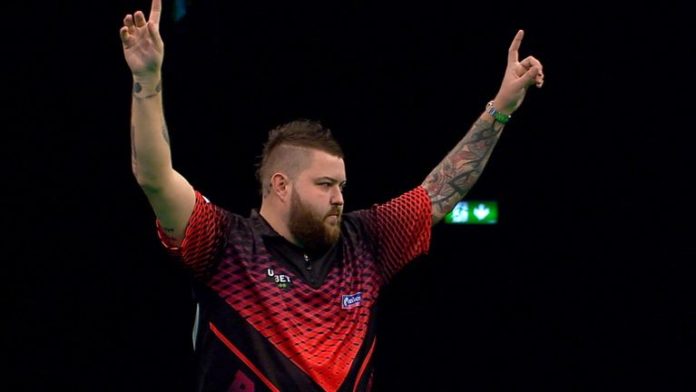 Coverage of the Premier League continues on Thursday, March 5 from Westpoint, Exeter at 7pm on Sky Sports Action and Sky Sports Mix

By Brian Barry at the 3Arena, Dublin

Meanwhile, there were wins for Gary Anderson and Nathan Aspinall, who recorded 7-5 victories over Rob Cross and Glen Durrant respectively.

Not many in the capacity congregation were expecting such fireworks, as Smith’s match with Gurney entered the fourth leg. But boy, did Smith delight the Dublin crowd.

His back-to-back 180s, followed by a 141 checkout brought the house down.

However, while he may have felt on top of the world, he still had a great deal of work to do with the players locked at 2-2.

Smith perhaps struggled to re-settle, and a scrap broke out as Gurney battled in his bid to move off the bottom of the table.

Nonetheless, the ‘Bully Boy’ eventually caught the wave of momentum generated by his perfect leg, and edged to a 7-5 victory.

Were it not for Smith’s heroics, Price’s ruthless 7-1 dispatching of world champion Wright would have led all the headlines from the Premier League’s visit to the Irish capital.

The back-to-back Grand Slam winner averaged 98.75 and hit 7/16 on doubles, as the below-par ‘Snakebite’ failed to muster a response on the Irish oche.

Price remains unbeaten, and arguably the most in-form player in world darts. Unbeaten in the Premier League after four rounds, he has reached three of the six finals in the Players Championship thus far in 2020.

The Price is certainly right at the moment.

O’Connor received a rapturous reception in Dublin, as he walked out to ‘Zombie’ by The Cranberries – a band hailing from his home county of Limerick. The atmosphere was electric.

Despite facing a chorus of boos, it was Van Gerwen who settled first, taking a break in the first leg and complementing it with a comfortable hold.

From there ‘The Magpie’ sprung into life, and broke back to level it at 3-3.

However, that was as good as it got for the Irishman as ‘The Green Machine’ moved through the gears, doing what he does best and storming to a 7-4 victory which helped him move top of the table.

Dublin it was pleasure 💚💚 very happy with my victory tonight. Willy played well and pushed this evening. The atmosphere this evening was phenomenal until next year Dublin thank you 💚💚 pic.twitter.com/smiRXDV1I1

Anderson gets the job done

Anderson huffed and puffed, but eventually blew away the challenge of Cross. The two-time world champion had his issues, missing 13 darts at double but dug deep to secure a 7-5 win.

It was a tit-for-tat contest, with ‘The Flying Scotsman’ adjusting to his new tungsten set. However, the breakthrough came at 4-4. ‘Voltage’ threw first, but the leg dragged on. Anderson finally secured a break with his 24th arrow, but it will have felt as satisfying as a ‘nine’, as it was the platform for his victory.

It acted as a shot in the arm, as he followed it up with a 14-darter. After stealing the break, he was not going to let up as he secured a 7-5 victory.

The Asp times run to perfection

‘Duzza’ stormed into a 3-1 lead in a blistering start that featured a 144 finish, and looked likely to pull further clear in the fifth leg. However, his usually-reliable doubling deserted him, as he missed seven arrows at a finish for a three-leg lead.

‘The Asp’ looked to capitalise on his momentum, and gained the upper hand but Duzza dug deep. They traded legs, and the match was finely poised at 5-5.

The decisive leg came down to doubling as the 28-year-old broke throw to move 6-5 ahead. He then sealed the two points on offer with a confident hold of throw, backing up last week’s win over MVG.

Coverage of the Premier League continues on Thursday, March 5 from Westpoint, Exeter at 7pm on Sky Sports Action & Sky Sports Mix with Gary Anderson taking on ‘Cool Hand’ Luke Humphries. Don’t forget, the Premier League is on every Thursday all the way through until the Play-Offs in London on May 21.