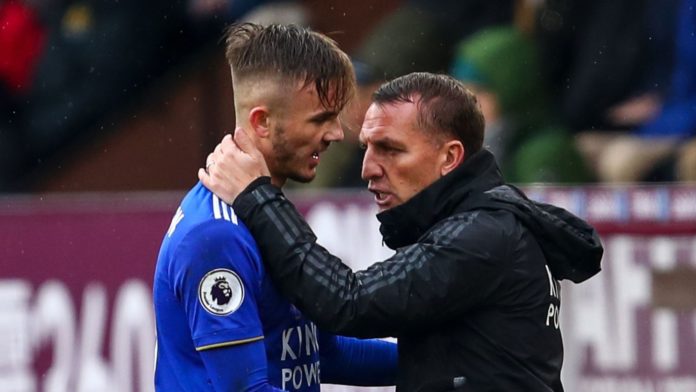 Leicester manager Brendan Rodgers is hopeful James Maddison will soon sign a new contract that will end speculation of a summer move away from the Foxes.

Maddison has established himself as a key player for Leicester since a £22.5m move from Norwich in June 2018 and Rodgers believes the 23-year-old is very happy at the King Power Stadium.

“Talks have been ongoing with the club and his representatives,” said Rodgers.

“I know the boy is very happy, he wants to be here and he sees this as the club he can develop at. I am hopeful it will be done.”

For the first time since leaving Carrow Road, Maddison returns to face his old club on Friday night, live on Sky Sports, against the manager who propelled him into the spotlight in Daniel Farke.

Although Maddison joined Norwich in January 2016 from Coventry, it was not until Farke’s arrival in May 2017 that he was given his chance, which he grabbed with both hands, paving the way for his big-money move to Leicester the following summer.

Rodgers knows how important Norwich and Farke are to Maddison.

“When I have spoken to him on it, he will always be grateful for the opportunity he got there because he was a young player out of League One,” Rodgers said.

“When he first arrived it didn’t quite happen for him, but Daniel came in and gave him that opportunity, and that opportunity allowed him to join us in the Premier League.

“I also know his sale allowed them [Norwich] the opportunity to bring in finance to stabilise the club, so it probably worked well for both.

“But everyone I know who has ever played for, or been at Norwich, has a great affinity with them and the area and James is no different.

“He will always be thankful and grateful for what Norwich gave him. They gave him a great platform and he has come to here.

“He knows he is employed by Leicester City. The money is in his bank every month and he wants to do his very best for Leicester City, so sentiment doesn’t come into it.”

Rodgers has Kelechi Iheanacho available after the striker passed concussion protocols following a collision with Manchester City goalkeeper Ederson that forced him off at half-time of Saturday’s 1-0 home defeat to Pep Guardiola’s side.

Hamza Choudhury returns from suspension, while fellow midfielder Wilfred Ndidi is doubtful with a knee injury.