Home Lifestyle How to Make a Tequila Sunrise 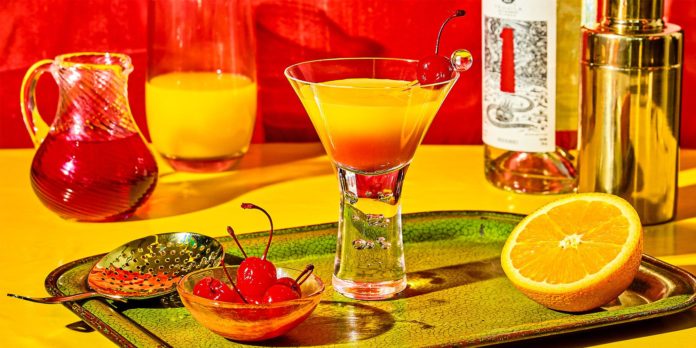 Going full cheese with your cocktail order isn’t en vogue in these days of amaro and aged whiskey and low-ABV options. But to those that relish it, we salute you. With Tequila Sunrises, naturally. This classic combo of tequila, orange juice, and grenadine is kinda tacky, kinda great. Its ratio of OJ to tequila validates it as an morning-t0-night drink that isn’t full-on wild—but more daring than a Screwdriver—and the bright color-blocking display is striking enough to warrant oohs and aahs. Just like the sun rising over the Gulf of Mexico on a particularly beautiful morning.

The Tequila Sunrises you’re familiar with are probably served over the rocks in a tall Collins glass, which is a proper construction if you’re using store-bought OJ. But if you can work the juice out of some oranges, serve it up in a cocktail glass—the lighter, fresh-squeezed stuff doesn’t need to be swallowed in melt water, and the ribbon of red will be more vivid.

The Tequila Sunrise screams the ’70s, much like Mick Jagger, bare-chested, shrieking into a mic on the Stones’ so-called “cocaine and Tequila Sunrise tour” of 1972. A year later, the Eagles released the soft jam “Tequila Sunrise” on their Desperado album. With endorsements like that, how could the cocktail not catch on? As for its origins, an early version might’ve popped up near the end of Prohibition at Tijuana’s Agua Caliente casino-resort-racetrack, a favorite of thirsty weekenders from LA. The version that we still sip today likely came to be at a restaurant in Sausalito, California, in the early ’70s.

The obvious sister to the Tequila Sunrise is a Screwdriver, which’ll do the trick if you’re short on tequila but stocked with vodka. Then there’s the Mimosa with OJ and champagne, to which you can even add a teaspoon of Grand Marnier, to give it a backbone.

Here’s what you need to do a Tequila Sunrise justice, beyond what you might be able to dig out of the fridge or cupboard.

The best indoor air-quality monitors: Identify the pollutants that can compromise your health and comfort