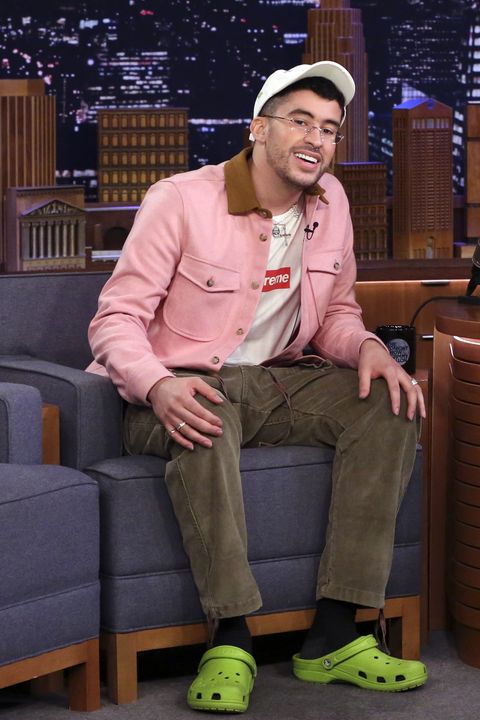 Bad Bunny’s been getting off some of the biggest fits in the game since he blew up stateside due to his particular brand of self-reflective bangers, and for his latest appearance on The Tonight Show, the Latin trap superstar showed up in a surprisingly toned-down look. (For Bad Bunny, bubblegum pink two different ways is toned-down.) For the interview portion of the show, he wore a simple Supreme box logo tee, the cornerstone of every respectable hypebeast’s regular rotation, underneath one of the best CPO shirts I’ve seen in a while, of Woolrich and Aimé Leon Dore. (He finished off the look with a pair of lime green Crocs, of course.)

Hit performance fit, though, was the real showstopper. Bad Bunny’s never been shy about sending a message with the way he dresses, especially when it comes to upending age-old conventions surrounding the way a straight man should present. While performing his newest single “Ignorantes”, Bunny rocked an oversized pink double-breasted blazer and a heavily pleated black kilt, dropping the former off his shoulders towards the end of his performance to reveal a simple graphic tee underneath. Bunny’s tee read “Mataron a Alexa, no a un hombre con falda,” or, in Engish: “They killed Alexa, not a man in a skirt,” a reference to a trans woman shot dead in his native Puerto Rico earlier this week and the police report that misgendered her as a “man dressed in a black skirt.” 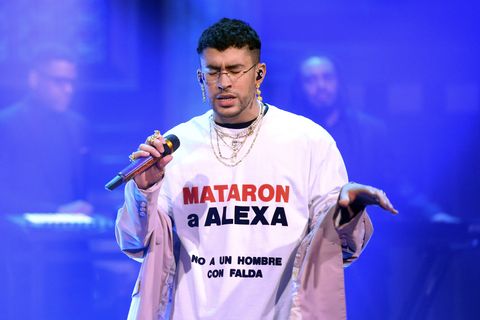 Taken in context, Bunny’s outfit is a touching tribute to Alexa’s memory and a poignant reminder that as much as I kid about “getting these fucking fits off,” an outfit is always an opportunity to make a serious statement, especially when you’re Bad Bunny.

The best indoor air-quality monitors: Identify the pollutants that can compromise your health and comfort