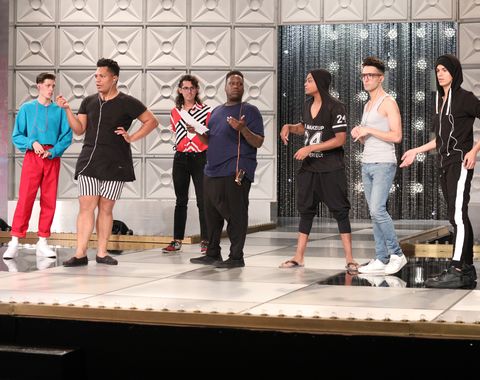 Shantay—may we call you Shantay?—please stay. As the headline suggests, you have landed on a post about RuPaul’s Drag Race, but seriously. Don’t leave. With the series going into its twelfth season, we thought it was time that we start paying attention to a subsection of fashion that has taken pop culture, put some lipstick on it, and made it doubly fabulous. Are these men (and the occasional woman) often in dresses and jumpsuits and bustiers? You bet. But if you’re not paying attention to drag, you’re only getting a fraction of the fashion story. Gender is a construct, just like our clothes.

RuPaul’s little reality series has turned into a behemoth that dared to shake up the style world, all the way down to men’s fashion. Remember that harness Timothée Chalamet wore to the Oscars last year? An impossibly skinny legend named Violet Chachki has a thing or two to say about that. So we invite you in with us this season to explore the fashion influences that this season of Drag Race offers because Shantay (we’re going to keep calling you that), it’s reading season. And you’re in need of an education.

Hello, hello, hello. Welcome to Fits for a Queen: a new weekly enterprise where we (Justin and Lauren) will be guiding you through the style and fashion details of Season 12 of RuPaul’s Drag Race. If you’re new to RPDR, it works like a basic competition reality show: every week there’s a fun, low stakes mini challenge, and then a maxi challenge—a winner is crowned, and two queens land in the bottom. Those two queens then lip sync for their life (spot in the competition) against one another. It’s chaos, but stylish chaos.

Season 12 of RuPaul’s Drag Race kicked off with introductions to seven queens—we’ll meet the rest of this season’s crop next episode. The downside of that is that we get no real action until next week, but the upside (especially if you’re new) is that you might actually get these bananagrams names down sooner rather than later.

Speaking of names, poor Heidi N Closet got a name roast like we have never before seen in all twelve seasons of this show, and mind you, this show has a winner named Bob the Drag Queen. But we’re here to talk fashion, so get on your leprosy print and reading glasses—you’re gonna learn today.

The Queens of Season 12 choreograph their routine for the maxi challenge.

Maybe we should have just started this whole thing the way RuPaul kicked off the first mini challenge: “I know for a fact that major players in the fashion world watch Drag Race for inspiration, so let them have it.” Somehow, nothing is more perfect than the of Anna Wintour rushing home on a Friday night to curl up with a bucket of popcorn and watch Drag Race with her sunglasses on.

And while the queens of RuPaul’s Drag Race have sewn, hot glued, and “sequenced” their way to the runway season after season, the first seven queens of Season 12 turned it out.

As Carson Kressley put it, Miss Widow “put her thing down, flipped it, and reversed it” in a reference to Missy Elliot, the queen of the tracksuit, with her neon neoprene jumpsuit number. We both, obviously, love a tracksuit and thought that Esquire’s own Style Director, Jonathan Evans, will probably be endorsing this in about five years. [Ed. note: Maybe even sooner. — JE]

LEARNING MOMENT: RuPaul also compared Widow to Mother of the House of Labeija. This is a reference to ball culture. She founded the concept of “houses,” which are a mainstay of the ball community. Ball culture, including Club Kid culture, has been influencing fashion for decades.

If you’re not a Drag Race regular, Jackie Cox’s ensembles are a prime example of just how many references can be made in a single look.

Jackie’s mod-influenced spring look was a nod to Barbara Eden, whose best known role is Jeannie in I Dream of Jeannie. Judge Michelle Visage also exclaims “Emilio Hoochie!” when Jackie enters, which is a pun on Emilio Pucci, an Italian designer known for his geometric prints and swirls in bright colors. On top of it, Carson Kressley calls the ensemble “very Lanvin, very Oleg Cassini”—Lanvin is a French high fashion house, and Oleg Cassini was an American designer known for his work for Jackie Kennedy herself, Miss Jackie Cox’s namesake. (Spoiler: she gets a direct reference later in the main challenge when RuPaul calls Jackie “Miss Bouvier.”)

Nicky Doll, the series’ first French queen, prides herself on being a look queen, and she doesn’t disappoint. On the runway, Nicky Doll rocked this black and white geometric suit, and Michelle called it “Hassidic meets Jean Paul Gautier,” which is truly a crossover for the ages. Jean Paul Gautier is a french haute couture designer who was a pioneer of playing with gender roles in his runway shows. Chanel and Karl Lagerfeld are also name-dropped, which, if you’ve ever seen a photo of the late great designer, is a no-brainer here.

LEARNING MOMENT: Drag queens tend to fall into subcategories, kind of like “genres.” A “look queen” is one whose bread and butter is mostly in fashion and turning out incredible outfits. There are also “comedy queens” and “pageant queens,” but for the purpose of this series, you can be pretty certain we’re predominantly going to have an eye on “look queens.”

Like we said before, in one final challenge, the queens strut the runway with a final look: this week, the high fashion continued. Our featured queen this week is Widow Von’Du: weird name, wonderful fashion. On a week where Nina Simone, Death Becomes Her, Valley of the Dolls, and Jackie Kennedy are referenced, it’s Widow Von’Du’s nostalgically futuristic outfit, noted as “very Judy Jetson,” that stood out above the rest. While this isn’t a cultural reference we probably need to explain, we want to acknowledge that Judy Jetson, despite only owning one outfit, is a fashion icon. That’s all.

Want to listen to Spotify remotely with your friends? There’s an app for that

15 Pieces of Highly Covetable Heat to Buy for Below $50