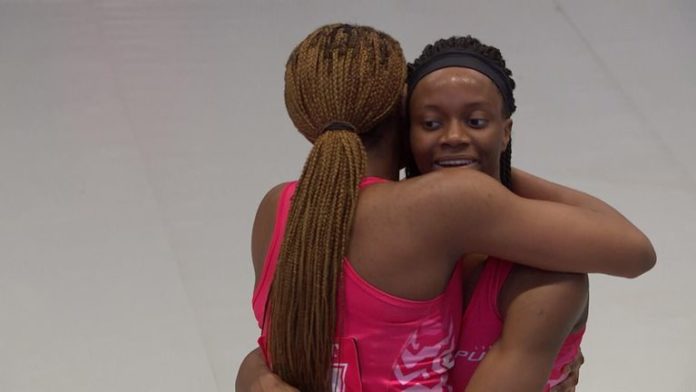 London Pulse continued a perfect start to the Vitality Netball Superleague season with a thrilling comeback to beat Surrey Storm 51-50 on Monday night.

Having led for much of the game, Pulse found themselves trailing by five goals with just five minutes remaining but a topsy-turvy contest had one more turn to take.

A couple of crucial defensive turnovers spun the game the visitors’ way and they had shooting pair Chiara Semple and Sigi Burger to thank for holding their nerve in the dying minutes to secure a narrow success.

Also on Monday night, two-time champions Wasps picked up their first victory of the season, beating Saracens Mavericks 57-53 at the Ricoh Arena.

It’s now two wins from two for Pulse, under the guidance of new coach Sam Bird, with the Londoners having already matched their total of victories from last season, their debut campaign.

However, it was heartache for Storm. Mikki Austin’s team had roared back from a 13-goal first-quarter deficit to take the lead midway through the third and looked good value to add to their nerve-shredding opening-day win against Celtic Dragons.

Yet having won by a single goal in Birmingham last week, they found themselves on the wrong end of another tight scoreline as Pulse joined Manchester Thunder and Team Bath with perfect starts to the season.

There was plenty from both teams to take away but the coaches will have been pleased with the impact from their benches, if not the consistency over the full 60 minutes.

A blistering start from Pulse had them 9-1 in front against a Storm team offering little in attack and that lead was extended thanks to the brilliance of Burger and Adean Thomas.

An early eight-goal lead became 13 by the end of the opening 15 minutes and Austin responded with changes that had an immediate impact.

In the defensive end, Lorraine Kowalewska forced turnover ball and in the attacking end, Sophie Hankin joined the action to impressive effect alongside Karyn Bailey. Storm were back in the contest, trailing by four at half-time.

Pulse were not without their own impressive changes. Another superb showing from the bench from 17-year-old Funmi Fadoju allowed Pulse to retain an element of control after Storm’s dominant second quarter but increasingly, the key moments were coming in the blue of the home team.

Everyone in a team has the ability to lead whatever the age,stage, experience, position.Some great examples of that in the @NetballSL tonight. Love finding ways to enable players to lead and mobilise those leaders around them ?? Be the gatekeepers of the culture you want to live

A couple of key turnovers allowed Storm to draw the score back to three, and Bailey reduced the arrears to just two goals before Kowalewska forced a crucial intercept that set a platform for the hosts to level the game and then lead for the first time in the match.

With the game into its final quarter, Storm continued to keep the smallest of advantages, edging into a two and then a three-goal lead as the errors increased from a young Pulse side.

However, Bird turned back to her experience as the re-introduction of Lindsay Keable and the energy of Fadoju engineered the visitors’ final rally, seeing them come from four down to level the match and then seal the win with Semple and Burger taking their chances to seal a big win.

Up Next – It’s a short turnaround for Surrey Storm as they travel to Glasgow to take on Strathclyde Sirens on Friday evening. For London Pulse, a first home match of the season awaits next Monday. Celtic Dragons are the visitors to the Copper Box Arena and both teams will be taking to court in front of the Sky Sports cameras.

Coverage of the Vitality Netball Superleague season continues with Round Three on Monday, March 9 when London Pulse entertain Celtic Dragons. Join us on Sky Sports Arena, Mix and YouTube from 6.45pm.

Shackles truly off for Andy Reid in Kansas City