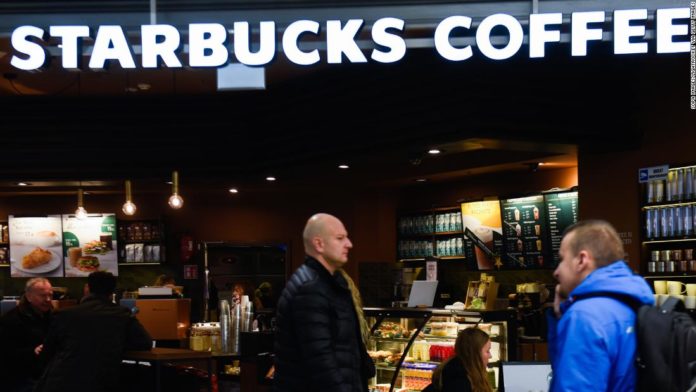 Starbucks (SBUX)on Wednesday announced it is temporarily suspending the use of personal cups and tumblers at its stores to help prevent the spread of coronavirus.
EVP Rossann Williams said the company will continue to honor its 10-cent discount for anyone who brings in a personal cup or tumbler for coffee, even though customers can’t use them.
“We are optimistic this will be a temporary situation,” Williams said in an open letter posted on the company’s website.
Starbucks said it is also increasing the number of cleanings at all its company-operated stores and suspending business-related air travel, both domestic and international, for the rest of March according to Williams.
Large meetings at the company’s offices in the United States and Canada are being postponed or modified, the company said.
“We will continue to communicate with transparency and act courageously and responsibly to ensure the health and well-being of our partners and customers,” Williams said.
Starbucks did not immediately respond to a request for comment on how long it is suspending the program. The Seattle-based coffee chain has given customers discounts for using their own cups for new purchases since 1985, according to the company’s website.
In 2010, Starbucks launched a campaign promoting the use of personal tumblers to reduce its paper trash output. The program has prevented millions of pounds of paper from ending up in landfills, the company said.