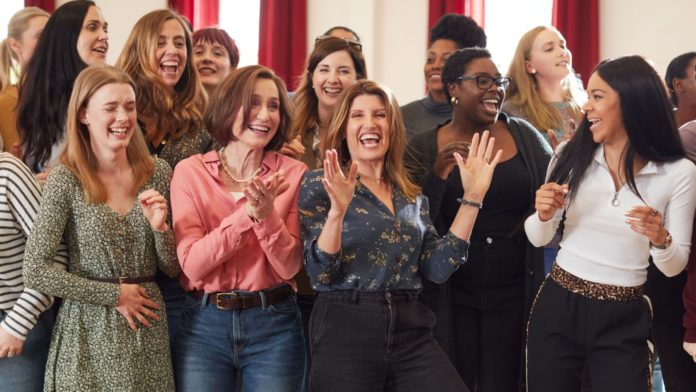 Sharon Horgan and Kristin Scott Thomas are both powerhouses of the entertainment industry – strong, funny, feisty and successful.

Scott Thomas is a BAFTA and Olivier award-winning actress with a career spanning four decades, while Horgan boasts a CV that includes running her own production company and writing as well as acting.

Both make shrewd and interesting career choices, and have come together for Military Wives, a feel-good film based on the true story of choirmaster extraordinaire Gareth Malone’s Military Wives choir.

Scott Thomas plays the glacial wife of a senior officer while Horgan, another soldier’s wife, is laid back, irreverent and witty – in the same vein as her role in the hit comedy series Catastrophe.

The film follows a group of women who set up a choir while their husbands are fighting abroad and shows the very ordinary and quite extraordinary things they experience, from choir practice and knitting club to the anxiety of waiting for news of their loved ones.

In person, paired together they are formidable – and you get the distinct impression they don’t suffer fools gladly – but Horgan is true to form and cracks the jokes, while Scott Thomas is both thoughtful and perfectly poised.

Horgan says she said yes to Military Wives because of Scott Thomas’s involvement, as well as the fact Full Monty director Peter Cattaneo was also at the helm.

“I think [Peter] was a big part of the reason,” she tells Sky News. “So it wouldn’t be too saccharine or treacly and could sort of show an authentic version of that world.”

Filming took place on a working military base, which Horgan says she was nervous about, because “you want them [the wives being portrayed] to feel you’ve done a good job and one of the things they kept saying was that it felt incredibly accurate, like they felt it was their lives up there.

“Because even though it’s showing the difficulties that they have and some of the real low points and down points, there’s other moments in between that can be sweet and joyful. It’s like, normal life is going on.”

Scott Thomas says it was great to work on a film starring so many women.

“Sometimes there were 40 of us and it was really fun, a completely different atmosphere,” she said.

Horgan agrees: “It’s not often that you get a chance to work with a huge bunch of women on film.

“It was kind of… I don’t know. How would you describe it? It was very relaxed,” she says with a wry smile.

This film is a celebration of female friendship and women’s resilience, and the conversation leads on to talking about how the entertainment industry has changed for women in the wake of the allegations and subsequent conviction of Harvey Weinstein.

“I think things have changed, they’ve changed at a snail’s pace, but they are changing,” says Scott Thomas.

“You certainly see more women technicians than you did 10, 15 years ago, but we’re still lacking in stories that are driven by women, that are about women, that are directed by women. I find it extraordinary that we still have so few women directors.”

“It’s incredibly bizarre because there is literally no reason for it,” says Horgan. “Other than it’s sort of considered, you know, a man’s world still.”

Horgan puts it down to the fact the people who make the decisions, who are in charge of the studios, who control the purse strings, are still predominantly male.

The issue has been part of the conversation for several years, but “until that changes, until that landscape sort of diversifies a bit, I think there’s still going to be a bit of trouble,” she says.

“It’s just important that no one takes their foot off the pedal because it could easily, easily step back, because it’s the easiest thing to do to draw up a list of 10 male directors.

“You have to look a little bit further and you have to take a few more chances if you’re looking to find a female voice to run a show or direct. I mean, there’s a lot of female producers, because its seen as sort of, mother role, isn’t it? Like, you get things together.”

Horgan believes changes have got to be “all pervasive” to really matter, “because if it happens in our film industry, it’s happening in a factory down the road and, you know, in a hospital. It’s something that everyone has to get involved in.”

Interestingly, Kristen Scott Thomas ends our conversation, which has been so centered around women, by talking about men – which makes me like her even more.

“I think that’s really difficult, to be a young man at the moment or even an older man, because there’s so many things that the rules have changed suddenly. And I think it’s quite destabilising.

“So we need to make sure as mothers, as women, we’re bringing up these boys that we teach them the new rules.”

Military Wives is out on 6 March