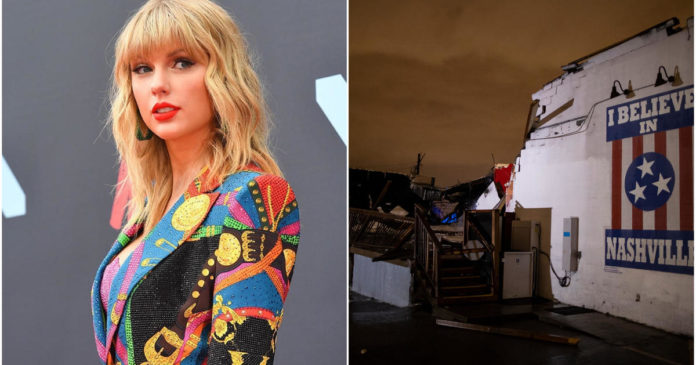 Devastating tornadoes touched down in Tennessee on Tuesday, destroying parts of Middle Tennessee, including Nashville. In response, Taylor Swift donated $1 million to tornado relief, according to The Associated Press.

“Nashville is my home and the fact that so many people have lost their homes and so much more in Middle Tennessee is devastating to me,” the singer wrote in an Instagram story on Thursday.

“I’ve made a donation to the Middle Tennessee Emergency Response Fund,” she wrote, including a link to the fund’s website.

Neither Middle Tennessee Emergency Response Fund nor a representative for Swift immediately responded to CBS News’ request for comment.

Swift was born in Pennsylvania, but moved to Nashville to pursue her music dreams. Swift is still very much a part of Nashville — she even votes there, according to her new Netflix documentary “Miss Americana.”

In 2018, Swift announced to her 112 million Instagram followers that she was voting for Tennessee’s Democratic Senate candidate Phil Bredesen, breaking her long-standing refusal to discuss anything related to politics. In the documentary, released earlier this year, Swift explained that she refused to vote for the state’s Republican Senate candidate, Marsha Blackburn, because she does not support LGBTQ and women’s rights. Blackburn eventually won the election.

In 2016, Swift made another statement when she helped fellow Nashville resident Kesha in her legal battle against producer Dr. Luke. Swift donated $250,000 to Kesha in what she called a “show of support” to help the singer get out of her contract with Dr. Luke, who Kesha accused of drugging, sexually assaulting and psychologically tormenting her.

Swift’s philanthropic endeavors extend past Tennessee. In 2018, she gave 2,000 foster kids a sneak peak of her concert in Arizona. Last year, she gave a fan in Canada $6,000 for school tuition and rent and showed up for another fan in Los Angeles who emailed her about planning a wedding proposal for his boyfriend.