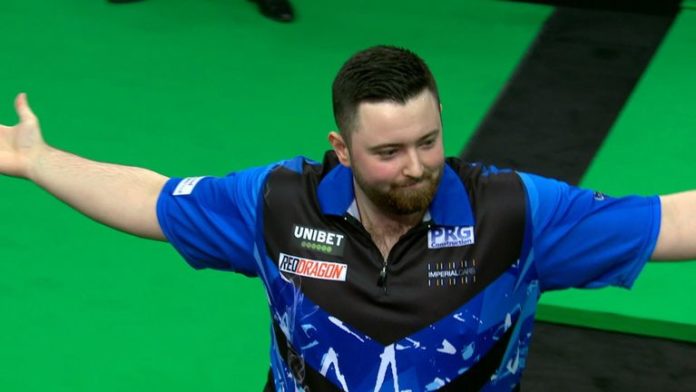 Coverage of the Premier League continues on Thursday, March 12 from M&S Bank Arena, Liverpool at 7pm on Sky Sports Action

The reigning world youth, who played out a 6-6 draw with Gerwyn Price as a Contender last season, landed double one to seal a remarkable win after Anderson had wasted the chance to earn a point on three visits.

Michael Smith closed the night with a 7-4 win over reigning Premier League champion Michael van Gerwen after Glen Durrant had cruised past Price.

However, a missed darts at double nine allowed Anderson to get on the board and then level thanks to a 12-dart leg

The two-time Premier League champion pinned tops for the the lead and after the pair exchanged holds it was Anderson Who edged back ahead with a nerveless double 14.

Newbury-born Humphries cleaned up 100 to make it 5-5 and took out nine to ensure he would not be beaten after Anderson failed to punish him for a miss on double nine.

A tense finale saw Anderson miss 66 before Humphries teased a 130 match-winning checkout only to allow The Flying Scotsman another opportunity.

Remarkably both men fluffed their lines again before Cool Hand returned to make no mistake, pinning double one for his history making moment.

After a memorable win over Van Gerwen in Belgium at the weekend, Smith followed up his nine-dart finish in Dublin by recording a first Premier League victory over the world No 1.

A 7-4 victory gave Bully Boy a third win in succession in the competition and moves him up to second in the table, above MVG, after a blistering start was almost undone by a late wobble.

Smith took out tops for the opener before gifting Van Gerwen an opportunity to make it 1-1 followed a missed dart at double 14. The Dutchman’s miss on the bullseye invited Smith to restore the lead and Smith fired in another maximum on his way to a 3-1 advantage.

Averaging just over 105 at the time, Smith sunk double 10 to race four legs clear, and then five following a stylish 134 checkout.

A hold in the next leg looked to have put the 29-year-old on the brink of victory, but Van Gerwen ramped up the tension with three successive legs.

Having seen double 16 elude him for the win, Smith finally landed double eight with his third dart in hand to complete the victory.

Gerwyn Price’s 13-match unbeaten run came to an end as he suffered a 7-3 defeat to Glen Durrant.

Duzza cruised into a 3-0 lead courtesy of a 14-dart break and some typically clutch finishing to mop up 80.

When the Iceman squandered the chance to pull a leg bag, Durrant pinned tops to go four clear.

A missed dart at a double cost Duzza a 5-0 lead and that allowed Price to seal his first leg with a 44 finish.

A 32 checkout put the three-time BDO champion four legs to the good again only for the Welshman to stay in touch courtesy of a classy 84. But Durrant dispatched 46 to make it 6-2 and he sealed the win two legs later with a superb 129.

Wright missed bullseye to take out 170 for the first leg as Aspinall cleaned up with a double four, but the world champion replied immediately to level it up.

Aspinall, who defends his UK Open title in Minehead this weekend, failed to take our 132 and Snakebite punishes him for an early break before a 14-dart extended his advantage.

A fired up Aspinall made it a one-leg game, but Wright kept his composure to take out a pressure double eight to make it 4-2 after a maximum from his opponent.

Back came Asp with a 76 checkout but his persistence came to little reward as Wright took out 58 for a two-leg lead.

Wright averaged just over 113 to break Aspinall and win the ninth leg, wrapping up the points with another 58 checkout.

Daryl Gurney’s wait for a first Premier League win of the season goes on after he salvaged a 6-6 draw against Rob Cross in Thursday’s opener.

Bottom of the table Gurney raced into a 3-0 lead early on before Voltage mounted a comeback, a vital 121 checkout secured his first leg of the night.

Cross reduced the deficit thanks to double eight with a pressure last dart and drew level in the next thanks to a 50 checkout.

He made it four on the bounce by taking out 20 to take the lead for the first time, only for Superchin to hit back after Cross had passed up an opportunity to go two legs clear.

The pair traded the next two before Cross secures a point to leave Gurney facing another defeat but a decisive double ten earned him a share of the spoils.

Coverage of the Premier League continues on Thursday, March 12 from M&S Bank Arena, Liverpool at 7pm on Sky Sports Action with Rob Cross taking on local hero Stephen Bunting. Don’t forget, the Premier League is on every Thursday all the way through until the Play-Offs in London on May 21.