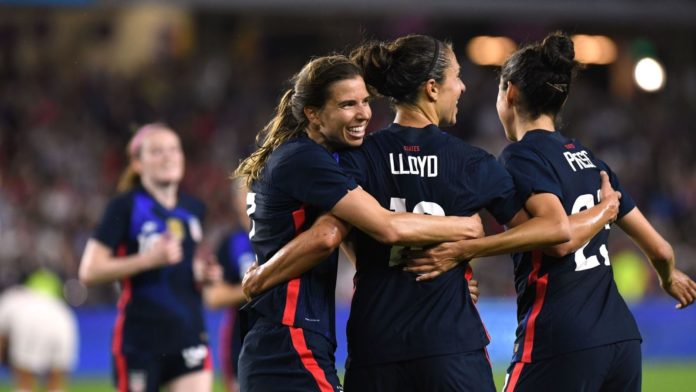 How did USA Women and England Women rate in the Lionesses’ disappointing start to defending their SheBelieves crown?

Made a number of strong saves in either half, was always quick off her line and undoubtedly kept the score respectable for England. Could do little about either goal.

Dealt well enough with what was often a two-on-one against Christen Press and Crystal Dunn down the USA left. Not her finest game but looked promising going forward and did well for how exposed she sometimes found herself.

The England skipper looked a yard off the pace at times, was partly culpable for both goals and was turned like she wasn’t there by Carli Lloyd late on, before she fortunately missed the target. Not a good evening.

Battled better than her centre-back partner but was totally unaware of Lloyd for the second goal and too often backed away from making a challenge when USA ran at the visiting defence.

Found life difficult up against Tobin Heath, who too often got past her down the outside. With better finishing, USA may would have had at least one goal from crosses down Greenwood’s side.

Struggled to offer enough protection to the England backline but did spray some nice passes around, particularly before half-time.

Saw more of the ball than most of her attacking colleagues but did very little with it. Looked indecisive and unsure when in decent positions, which is concerning for a player who has five in six domestically.

Unusually ineffective against a USA midfield which outfought and out-thought England’s on the night. Unlucky she did not have more time to react from a first-half corner when she fired over.

Some decent deliveries, particularly from corners from the left, should have offered England more than it did on the night.

Probably England’s shining light in her first Lionesses start. Her raw pace will give opposition nightmares, as it did at times against the USA, and with better service she looks like she will really deliver.

Not solely down to her, but largely silenced by a tight USA defence – which has now gone more than 600 minutes without conceding a goal – while she also wasted a number of half-chances with poor shots from distance. With Beth England on her tail, could have done with a better showing.

Showed England what they had been missing with an immediate added bite, leadership and spark in midfield.

For an attacking substitution, saw little of the ball.

Showed some endeavour to turn and shoot over with one of the hardest chances of the night. Will surely get her chance soon given her domestic form.