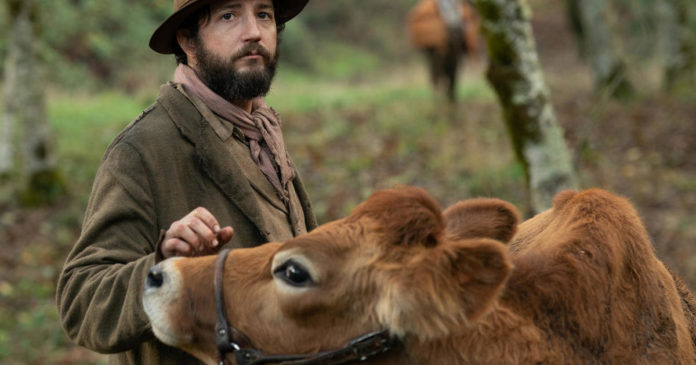 The Oregon Territory in 1820, even in its pristine beauty, was rough-hewn, and didn’t easily give up its resources to the plundering of traders and settlers from many countries who converged on the land seeking their fortunes in, say, beaver pelts.

But the promise was alluring, as dramatized in the new film “First Cow,” in which the tiny, muddy trading post that stood in for civilization in the Oregon wilderness becomes the destination for Cookie (John Magaro), who works his way west in hopes of finding his place in the world.

Cookie proves his generosity of spirit and basic goodness when he helps a Chinese immigrant running from some rough frontier justice. King-Lu (Orion Lee) soon disappears, but turns up again at the trading post’s shanty town. The two men fall into an easy friendship, one in which King-Lu’s looser morals have a decidedly persuasive effect, as when the first dairy cow in the region is hauled off a barge and roped to a nearby tree. Surely the cow’s milk would make for some delicately tasty biscuits for which the trappers and other residents of the town would pay dearly.

But the cow doesn’t belong to them? Minor problem. That’s what nightfall is for.

That is the premise of Kelly Reichardt’s remarkably enticing new film, which screened at the Telluride and New York Film Festivals last year and opens in theatres on Friday. Adapted from the 2004 novel “The Half-Life” by Jon Raymond (who co-wrote the screenplay with Reichardt), “First Cow” is a primal drama of the American dream, and of people living on the periphery of wilderness who would, in one fashion or another, help define a young nation’s character.

Among Reichardt’s past films are several in which the American West, of the past and present, offers powerful stages for characters facing transformative inner conflicts, including “Meek’s Cutoff” (2010), her contemplative western about settlers on a wagon train mired in Oregon’s High Desert; and “Certain Women” (2016), in which the Montana landscape, both rural and urban (or what may count for urban in Montana), defines the boundaries of several female characters trying to break out of routine or conformist expectations.

Reichardt, whose parents were police officers (they worked crime scenes and undercover), displays a pronounced facility for looking beyond the surface of relationships. She is a master of quiet drama — not to say there isn’t violence or threats of violence in “First Cow,” but Magaro’s tender, inviting performance pulls us into Cookie’s conflict with his own sense of shame. How far can he push himself beyond what would be considered the limits of acceptable behavior east of the Mississippi, when encouraged by Lee’s entrancing King-Lu, a personification of an American West opening its doors of opportunity to anyone with the brazenness and guts to enter? You feel Cookie’s despoilment, and realize there can be no retreat, only a shared sense of commitment owing to their friendship.

Lee’s performance likewise draws the audience into his character. King-Lu exudes a clarity of vision that allows him to operate almost on a different plane from others arriving in the territory who are too focused on their meager possessions, or the shine of one’s boots. It gives him (and Cookie) the confidence to push their luck.

Also effective is Toby Jones as the trading post’s English-born chief factor, who has the status of an actual house with servants, and who would use Cookie’s culinary prowess to score social points.

William Tyler’s music, performed on guitar and dulcimer, is perfectly in tune with the cloaked mystery of the Pacific Northwest’s forests. Other technical credits — Christopher Blauvelt’s cinematography, the production design of Anthony Gasparro, and the costumes of April Napier — are first-rate.

And while the movie’s first several minutes might lead you to believe you’d walked into the wrong theatre, they are actually this gifted director’s very effective and haunting demonstration of the impermeable fabric of time, and how some of its mysteries can never, ever be resolved by us.

“First Cow” (distributed by A24) opens Friday in New York and Los Angeles, and expands to select cities nationwide on March 13 and 20. Rated PG-13 for language.

To watch a trailer for “First Cow” click on the video player below: