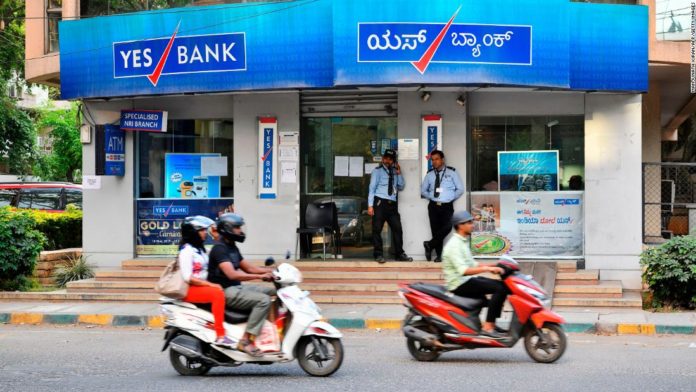 The Reserve Bank of India said Thursday that it had taken over Yes Bank, citing a “serious deterioration” in its financial position. The central bank said it had to act quickly to restore the confidence of Yes Bank’s customers, who had been withdrawing their deposits.
Shares of Yes Bank, which describes itself as India’s fourth largest private lender, collapsed following the announcement. The company’s stock fell 56%.
The RBI announced a draft revival plan for Yes Bank on Friday that involves the government-owned State Bank of India — the country’s biggest lender — taking a 49% stake.
This isn’t the first time India’s central bank has had to intervene at Yes Bank. In 2018, the RBI forced its founder Rana Kapoor to step down as CEO after 14 years at the helm. Kapoor was replaced by former Deutsche Bank India chief Ravneet Gill last year.
Yes Bank’s rescue comes at a very delicate moment for India’s economy, which logged growth of just 4.7% in the last three months of 2019. That was half of the country’s rate of expansion three years earlier.
Domestic demand in India has slowed sharply due to stress in its financial sector and lower credit growth. The RBI said Yes Bank was unable to raise the capital needed to cover “potential loan losses and resultant downgrades.”
Bad debt posed a risk to India’s economy even before the coronavirus outbreak hit, and those problems could now pile up given the expected slump in growth.
India has 31 confirmed cases of the novel coronavirus, prompting concerns that the second most populous country in the world could face a spike in infections.
— Rishi Iyengar contributed to this article.