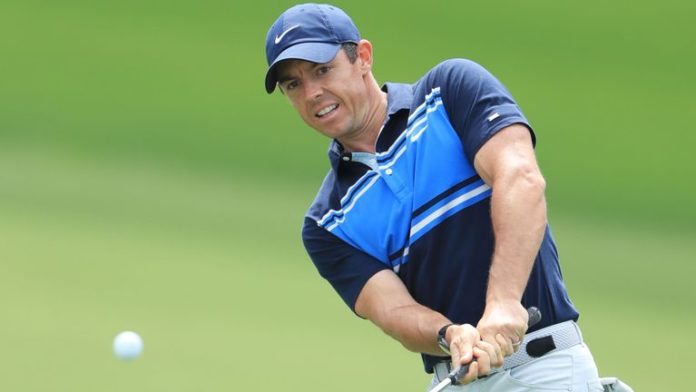 Watch the third round of the Arnold Palmer Invitational live on Sky Sports Golf from 5.30pm on Saturday

Tyrrell Hatton fired a three-under 69 to take a share of the lead at the halfway stage of the Arnold Palmer Invitational.

The 28-year-old Englishman upstaged Rory McIlroy at Bay Hill as he moved to seven-under 137 after 36 holes, ending the day alongside South Korea’s Sung Kang (68).

The pair are one clear of Danny Lee of New Zealand (67), with McIlroy (73), American Harris English (70) and last week’s Honda Classic winner, Sungjae Im of South Korea (69), one further back in joint-fourth.

Hatton, who has four European Tour wins to his name but is chasing a maiden PGA Tour success, started at the 10th and followed a birdie at the 12th with a bogey at the 13th.

His round came to life when he just missed out on an eagle at the 16th and he then added another birdie at the par-three 17th after a superb tee shot to five feet.

The world No 32 slipped up at the third when he found water with his approach but atoned for that bogey with a birdie at the fourth thanks to an 18-foot putt from just off the green.

He then put himself out in front by holing a 13-footer for his fifth birdie of the day at the eighth, although he was later joined at the top of the leaderboard when Kang made his fourth birdie in seven holes at the 18th.

McIlroy, who was one off the lead after an opening 66, missed a 10-footer to drop a shot at the second and then had a three-putt bogey at the seventh after birdieing the sixth.

The eighth provided a low for the world No 1 as he took three blows to hack his way out of the right rough on his way to a double-bogey six, shots which he clawed back with excellent birdies at the ninth and 12th.

He slipped up again when missing from seven feet at the 15th but was back within two of the lead after holing a 20-footer at the 17th before a par at the last gave him a one-over 73.

Meanwhile, Tommy Fleetwood will have a rare weekend off after he missed his first cut since the 2018 Open de France, and ended a run of 33 PGA Tour events without missing the cut, following a second successive 76 which left him on eight over.

Justin Rose’s poor form continued as he missed the cut for the second week running after a 77, which featured double-bogey sixes at the first and 18th.

Lee Westwood, Adam Scott, Phil Mickelson, Henrik Stenson, Tony Finau and Bubba Watson were among the others to fail to make the mark, while Jason Day withdrew after five holes with a back problem.

First-round leader Matt Every followed his opening 65 with an ugly 11-over 83 to remarkably miss the cut by one.

Every, who also shot an 85 in the second round of last week’s Honda Classic, said: “It stinks for me because I really wanted to play well and I really didn’t see this coming, to be honest. But it happens. It just happens to me – it kind of happens to me quite a lot.”