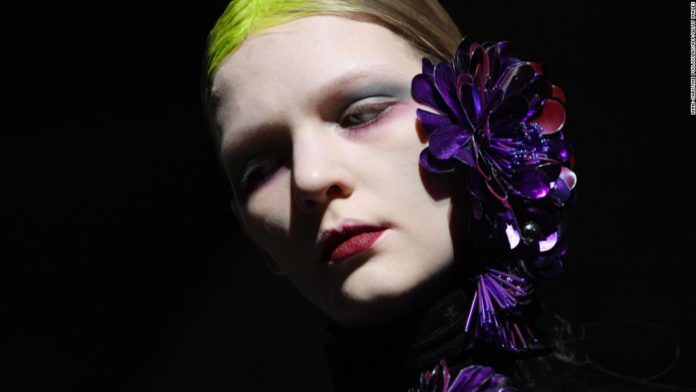 Paris Fashion Week wasn’t just about celebrating new looks this season. Coronavirus fears loomed large for visitors in the French capital — the last stop in a series of Fashion Weeks that kicked off in New York nearly a month ago. Many of the crowd had arrived straight off the back of Milan Fashion Week, where cases of COVID-19 continue to surge.

With masked faces in the crowd and plenty of hand sanitizing, the tense mood was elevated by themes of global warming, political unrest and social injustice — tackled by some of the biggest shows. The most unforgettable moments were delivered by Balenciaga’s bleak futuristic outlook and Balmain’s musings on class.

There was no stopping Demna Gvasalia’s apocalyptic vision for Balenciaga. Red skies turned to high seas and torrents of flames lapped across the ceiling screens. Mournful techno filled the air. The label’s creative director didn’t pull any punches, flooding the stage and first three rows of seats with water, a message about rising sea levels.

And while the audience sat back from the action, a diverse group of models sloshed through the dimly lit arena. Gvasalia, whose family fled Georgia during the country’s civil war, cast everyone from a gymnast and a law student to a hotel cleaner and a systems engineer (and even a couple of professional models) to walk his show. Everyone was looking down the barrel of the future together.

A new kind of class

Deep underground in a peach-lit concrete show space, warriors — the “Balmain Army,” according to the show notes — paraded down the runway in flawlessly tailored, exaggerated variations on the 1980s powersuit, superhero-inspired ensembles, and hard-molded bustiers complimented by acres of shawl. Body-hugging suits crafted from latex by designer Atsuko Kudo made an appearance in gold and chocolate brown, as did a reimagined version of the classic Balmain double-breasted blazer.

“Many of the codes of a world that was once beyond my reach are key parts of this collection, including classic equestrian styles, harlequin patterns and silk-scarf motifs,” creative director Olivier Rousteing, who grew an orphan in middle-class Bordeaux, wrote in the notes of his sartorial references to the wrold’s “1%.”

“This collection adapts those symbols of upper-class exclusion and twists them to turn the focus on a wider and no-longer closed-off world — one of open doors and open minds.”

A model walks through the haze at Rick Owens Autumn-Winter 2020/21 Credit: Francois Mori/AP

From combats to thigh-highs and thick-soled Chelseas, boots were the runway footwear of choice, whether in rich creams and browns at Balmain or lime green at Balenciaga

Stomping footwear was on many of the models in Valentino’s hard-edged show, and took shape as Musketeer boots at Chanel. American designer Rick Owens gave them a futuristic spin. Survivalist chic? It suited the mood.

But it wasn’t all doom and gloom: some shows sent a more optimistic message.

Issey Miyake came as a welcome relief. In a light-filled secondary school, a human chain of models, dancers and French teenagers moved as one, connected by his colorful knitwear, in a celebration of the global community.

Then there was a slew of showstopping gowns and party dresses. Alexander McQueen offered a ballooning black tulle and sparkling embroidery dress, while Givenchy went monochrome with a tailored top and feathered full skirt.

Slender Balenciaga event dresses were top-to-toe — literally, with the gown, shoes, gloves and leggings all combined in one piece. Loewe transformed a neo-classical gown into devil-may-care daywear, fit for Alice’s adventures traipsing after a white rabbit.