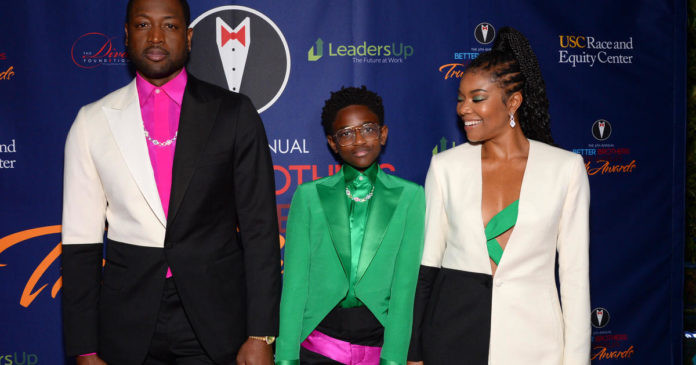 Dwyane Wade’s daughter Zaya walked her first red carpet Saturday night since her father publicly shared she wanted to be referred to with female pronouns last month. The basketball legend said his family “couldn’t have been prouder” of 12-year-old Zaya in a sweet Instagram post Sunday.

“Everyone allow her to re-introduce herself her name is Zaya Wade!” wrote Dwyane on Instagram on Sunday, alongside a photo of his daughter. “Last night was Zaya’s first red carpet and we couldn’t have been prouder of how she handled the questions that were asked of her. She has emerged as one of the young faces and voices for the LGBTQ+ community.”

On Saturday night, Dwyane, his wife Gabrielle Union and Zaya attended the Truth Awards in Los Angeles. The ceremony aims to honor the achievements of the black LGBTQ+ community, as well as its allies. The awards also provide funding for scholarships which promote educational opportunities for young people in the LGBTQ+ community.

The family wore custom color-coordinated ensembles designed by Rich Fresh, Dwyane said on Instagram in a second post about the event. Fresh said in his own Instagram post that the jade and fuchsia accents in the ensembles were Zaya’s idea, calling her “a force to be reckoned with.”

During an appearance on “The Ellen DeGeneres Show” last month, Dwyane opened up about the moment Zaya told him she wanted to be addressed with the pronouns she/her.

“Zaya, our 12-year-old, came home — I don’t know if everyone knows, originally named Zion; Zion, born as a boy — came home and said, ‘Hey, so I want to talk to you guys. I think going forward, I’m ready to live my truth. And I want to be referenced as she and her. I’d love for you guys to call me Zaya,'” Wade said.

Shortly after he spoke with Degeneres, the retired basketball star and father of four told Entertainment Tonight why the family decided to tell the world about Zaya’s journey.

“We understand the position we’ve been put in, especially in our community, and even though it’s not always a popular thing to speak out on issues that people are uncomfortable with or not as educated on, but this is the platform that God gave me and my family,” he said. “So, we use it.”

Wade and Union have been strong supporters of Zaya, who has faced criticism from online bullies. In 2019, Union went to Miami Beach Pride Festival with Zaya and the couple designed a T-shirt that promotes inclusion and equality.