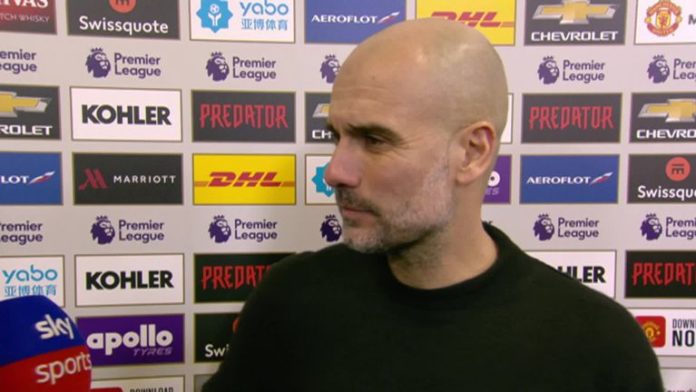 Pep Guardiola refused to criticise his Manchester City players despite seeing his side suffer yet another defeat to Manchester United – but Bernardo Silva labelled the 2-0 loss as “unacceptable”.

Goals from Anthony Martial and Scott McTominay – both helped by errors from City goalkeeper Ederson – sealed a third derby win of the season for Ole Gunnar Solskjaer’s United at Old Trafford.

However, Guardiola – who has only once been beaten by an opponent so many times in a season before and never suffered as many as the seven league losses his team have endured in 2019/20 in one campaign – was adamant City had performed well.

“We missed a little bit, especially in the first half, when we arrive in position, the three quarters, to be a little more aggressive. We concede a goal, we should avoid it. Second half was good. Congratulations United.

“We were a little bit more aggressive [in the second half] but in terms of the way we play, we played good in both [halves].”

On the two goals conceded, Guardiola stood firmly beside Ederson and refused to criticise the goalkeeper for allowing Martial’s shot to slip under him after Bruno Fernandes’ clever free-kick, or for throwing the ball to McTominay in the final moments of the game.

“We knew sometimes Fernandes makes this kind of chipping but the quality of the opponents always counts.

“[Ederson] played, he saved one or two, he’s an exceptional goalkeeper.

“We play a good game. The schedule, we know. Liverpool are far away and we want to play the game for ourselves. We thought about today and we did it.”

Guardiola also rejected the suggestion his team’s motivation levels have dropped off in the league, with cups now their priority.

“Did you see a lack of motivation in how the players moved, pressed, made the United players play long balls and how they couldn’t make three passes in a row? It’s not true,” he said in his post-match press conference.

“The behaviour is good and how quick we moved the ball and how we arrived in the final third, especially in the second half, was good. I’m satisfied, I know we lost, but I liked the game we played. When I don’t like it, I tell you.”

City midfielder Bernardo Silva was far more critical in his analysis of the game and branded his side’s performance in the fixture as unacceptable.

“It was a bad game for us. In my opinion not acceptable,” he told Sky Sports. “Very bad day.

“We didn’t start very bad, I think we were playing quite well until we conceded a goal. But we know how Manchester United plays, how good they are on the counter-attack, how aggressive they are defensively. Not a good performance, not acceptable for us.

“We have to watch the game, we have to listen to what Pep has to say. It’s too close now to know what we lacked but a team like ours cannot lose this many games in the Premier League as we have lost so far this season. We need to check what’s not going right and not make the same mistakes.

“From my point of view and from where I was, it was clear it was not a foul [for the free-kick before the opener]. The referees like us, like all the players, they can also make mistakes. It’s football, it’s what it is.

“The reality is that the pressure is not on the Premier League, we don’t have much pressure because we know our position is probably not changing a lot because we won’t get to the title, I think we’ll be second to qualify for the Champions League.

“That’s a thing but it’s a derby game, it’s an important game for our fans and it’s not acceptable to come here and play the way we did and lose 2-0.”