Home World Markets tumble as novel coronavirus cases grow in the US and northern... 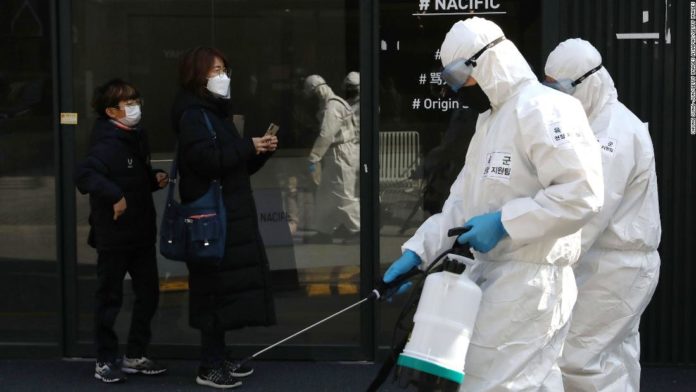 At least 3,821 people have died as a result of the virus so far, with the majority in mainland China. But figures outside of the country where the virus was first reported are growing, even as China slowly starts to get back to normal.
Almost 100 countries and territories have now confirmed cases, and dozens of deaths have occurred in Italy, Iran and South Korea. Italian authorities have placed much of the northern part of the country on lockdown, affecting nearly 15 million people, while other regions will face varying forms of travel restrictions. More than 7,300 cases and 366 deaths have been confirmed in Italy.
In neighboring France, the number of cases has grown to over 1,100, with at least 19 deaths, as fears of a Europe-wide epidemic continue to grow. Germany and Spain have both also reported hundreds of cases.
Markets tumbled overnight Sunday in the US, with Dow futures falling more than 1,000 points and the S&P 500 plunging as much as 5%, triggering a limit that prevents futures trading below that mark. The sell-off continued across Asia-Pacific, where both Australian and Japanese markets fell on Monday opening.
Wall Street has faced heavy losses for the past several weeks due to fears surrounding the coronavirus. During the last week of February, US stocks had their worst week since the financial crisis, and the economic disruption caused by the virus doesn’t appear to be letting up.

South Korea confirmed 248 new cases of the coronavirus as of Monday morning, bringing the national total to 7,382. There was one additional death from the virus on Sunday, bringing the national toll to 51.
While South Korea remains one of the worst outbreaks outside of mainland China, the new figures are the lowest increase per day in the country since February 26, raising hopes that the virus may be coming under control.
Around 90% of cases nationwide are from Daegu and North Gyeongsang province, where the outbreak first began. It has been linked to the Shincheonji religious group, one of a large number of new religious movements in South Korea, which has come under intense scrutiny since the outbreak, amid allegations leaders have not done enough to share information with the authorities.
In neighboring North Korea, no cases have been officially confirmed of the coronavirus, but global health experts have warned the country is highly susceptible to an outbreak given its close proximity to China and limited medical capabilities.
An evacuation flight with foreign diplomats who were quarantined in North Korea landed in Vladivostok Monday morning with 103 people onboard, a source on the flight told CNN.
Foreign diplomats stationed in North Korea had been kept in complete isolation since early February, amid concerns about a potential outbreak there. The exact number of foreign diplomats stationed in the country is unknown, but is estimated to be just a few hundred.

Even as there were signs of improvement in Asia — with China too continuing a decline in the number of new cases — the situation in Europe and North America appears to be worsening.
Italian Prime Minister Giuseppe Conte signed a decree early Sunday that will put millions of people across northern Italy on lockdown. The sweeping move puts the entire Lombardy region, as well as 14 other provinces, under travel restrictions, and is one of the toughest responses implemented outside of mainland China to get the Covid-19 epidemic under control.
Announcing the new measures, Conte said: “There will be an obligation to avoid any movement of people who are either entering or leaving” the affected areas. “Even within the areas moving around will occur only for essential work or health reasons,” he said, according to Reuters.
While the lockdown only applies to northern Italy, other measures will be applied to the entire country. These include the suspension of schools, university classes, theaters and cinemas, as well as bars, nightclubs, and sports events. Religious ceremonies, including funerals, will also be suspended.
The World Health Organization (WHO) has called on “all countries to continue efforts that have been effective in limiting the number of cases and slowing the spread of the virus.”
In a statement, the WHO said: “Allowing uncontrolled spread should not be a choice of any government, as it will harm not only the citizens of that country but affect other countries as well.”

In the US, almost 500 cases of the virus have been confirmed, along with 19 deaths. The worst outbreaks are in New York state and California, where a cruise ship has been stuck off the coast for several days, as passengers were tested onboard. Health officials said the Grand Princess liner will dock in Oakland on Monday, and passengers will be transferred to federal military installations.
Multiple governors have declared states of emergency in their territories, as cases were reported across the US, including in Washington DC. An attendee at last week’s Conservative Political Action Conference (CPAC) in Maryland, at which President Donald Trump and Vice President Mike Pence were guests, has also tested positive for the virus.
Senator Ted Cruz and Representative Paul Gosar both said they will self-quarantine after interacting with the individual who tested positive. While neither man was showing any symptoms, they are isolating themselves out of what Gosar described as a desire to be “proactive and cautious.”
Asked if he was worried about a potential exposure, the 73-year-old Trump said, “I’m not concerned at all.”
“We’re doing very well,” he said of the US response to the virus. “We’ve done a fantastic job, with respect to that subject, on the virus.”
Trump has faced intense criticism for appearing to downplay the severity of the outbreak and dangers posed to the US, as well as spreading conspiracies, such as that the media is exaggerating the virus in order to hurt his administration.
Two of Trump’s key methods for encouraging his supporters have been affected by the virus: a booming stock market and mass rallies. He has sought to blame the downturn in the markets on the opposition Democrats’ prolonged primary process, though few experts agree with this analysis, and so far has not canceled any rallies, even as health officials warned people to avoid large crowds.
“These were set up a long time ago,” Trump said in the Oval Office when asked if it was a good idea to proceed with his planned rally on Monday evening in North Carolina. “I think it’s very safe.”