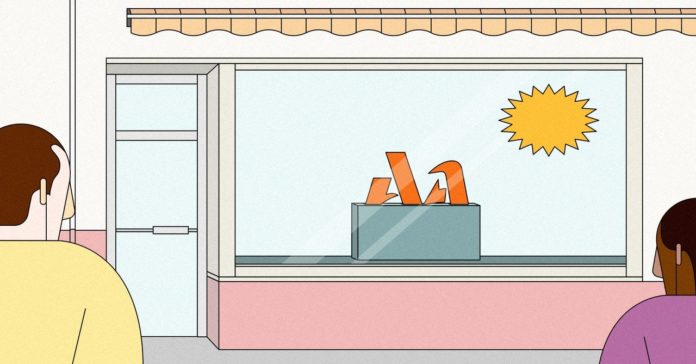 Digestive is a peculiar font. Its ornate, wiggly letters make it look a bit like calligraphy by aliens from outer space. But Digestive isn’t just unusual in how it looks. It’s also unusual in how it was sold. Thanks to Future Fonts, a platform for selling fonts that are still works-in-progress, Digestive was already gracing magazine covers, concert posters, and even perfume boxes, before designer Jérémy Landes considered it finished.

Like other commercial fonts, it can cost hundreds of dollars to license Digestive if you want access to multiple styles for print, web, and app use. But Landes began selling a single style of Digestive, without some characters, in 2018 for $40 through Future Fonts. The lure: Purchasing the early version would give you access to other styles and characters, when they were completed, at no extra cost; Digestive now comes in seven styles and supports hundreds of characters.

Future Fonts, launched by Lizy Gershenzon and Travis Kochel in 2018, now sells more than 100 font families by more than 50 designers using this model. Not all of them are as weird as Digestive. Phantom Sans, for example, is a pretty straightforward sans serif font. Others, like Zangezi, fall somewhere in between. The prices also vary. Phantom Sans, which is fairly polished and includes multiple styles, sells for $79. Meanwhile, Ampersandist, which evokes the feeling of German blackletter typefaces, is available in only a single style and costs $10. Once you’ve paid for a font, you get all updates, including new styles and features, for free. The catch is that there’s no guarantee that a designer will ever finish a font.

Even early-stage fonts available in few styles or without extensive character sets can be useful for graphic design projects, says Bijan Berahimi of FISK, a Portland, Oregon, design studio and art gallery. He used Future Fonts typefaces extensively in client projects before being hired by Future Fonts to produce an exhibit for the company. Some projects require font families with a wide variety of styles and characters. “But if I’m just looking to type out a musician’s name and only need six characters, I don’t care if a font doesn’t have a question mark or lowercase,” he says.

“The low prices make it easy to buy for a project that doesn’t have a huge budget,” Berahimi says. That’s especially important for design students who Berahimi says often rely on pirated fonts instead of shelling out for commercial licenses.

For type designers, offering a steep discount for a work-in-progress font is a way to test the market, helping them learn which designs are worth pursuing. “It’s also very liberating that you can publish an unfinished font and see if people like it, how they use it, and what their needs are,” says Zangezi designer Daria Petrova. “It is a great source of inspiration, and you can work in your own rhythm without being bound to contracts or deadlines.”

A type designer could spend months or years designing a new font. You need to draw hundreds of individual characters and perfect the spacing between characters. Popular fonts, such as those preinstalled on your computer, typically come in four styles: regular, bold, italic, and bold italic. But commercial font families often include dozens of styles, covering multiple weights and widths. That’s a big investment of time for a product few people may ultimately want.

James Edmondson, founder of Ohno Type and a partner at Future Fonts, often posts typeface designs he’s working on to social media to gauge interest. But he says the number of likes something gets on Instagram isn’t a good indicator of how well it will ultimately sell. “It makes a difference when people are voting with actual dollars,” he says.