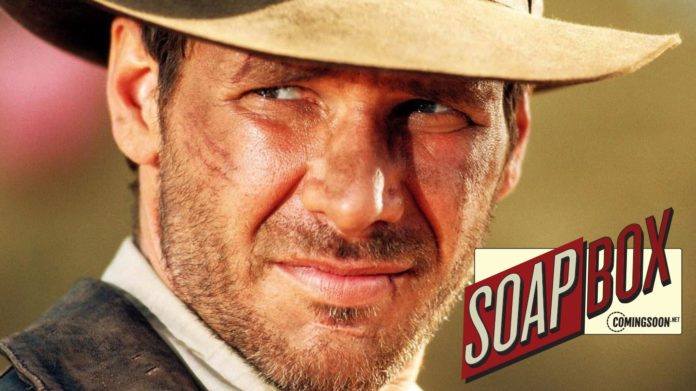 CS Soapbox: 5 McGuffins Indiana Jones Should Look for in Indy 5!

Indiana Jones 5 will arrive in theaters at some point, perhaps even directed by James Mangold, who stepped into negotiations after Steven Spielberg vacated the director’s chair last week. By all accounts, it sounds like Harrison Ford, for better or worse, will take on the mantle of everyone’s favorite Nazi-punching archaeologist once more, which begs the questions: what will Grandpa Jones search for this time?

Keep in mind that the film will take place in the 60’s, since the last outing, Kingdom of the Crystal Skull, ended in 1957, meaning the bad guys will likely be Russians again. Though, seeing how audience reactions to Crystal Skull were mixed at best (despite a lofty box office return), the powers that be might want to distance themselves from any similarities.

In any event, we know Indy will quest for something. As such, I’ve scoured the internet and found five artifacts that make the most sense for Dr. Jones to search for in his lifelong bid for fortune and glory. Read!

A lot of speculation exists that the Fountain of Youth will serve as the big artifact/place Indy searches for in the next installment. The History Channel’s website details Spanish legends surrounding a magical fountain with rejuvenation powers that somehow perked the ears of Juan Ponce de León, who ventured to the new world with Christopher Columbus. Obviously, old Ponce never once mentioned anything about a Fountain of Youth in his journals, but the legend somehow attached itself to his name, mostly due to voyages that went mysteriously undocumented. Eventually, everyone from Washington Irving to artist Thomas Moran was connecting Ponce with the legend and now here we are.

The biggest issue I have with this particular McGuffin? We’ve already seen it. In Indiana Jones and the Last Crusade, our titular hero goes on a quest to find the Holy Grail which grants eternal life and (somehow) heals bullet wounds. Sure, the fountain ties into the older Indy theme and likewise creates a pressing reason as to why he needs to keep the location out of enemy hands, but it really isn’t that compelling or unique of a story. Plus, didn’t Jack Sparrow already solve the whole Fountain of Youth mystery in one of those bonkers Pirates movies? (And wasn’t that movie awful?) Surely, Indy can do better than that.

There are a lot of lists detailing/speculating which artifacts Indy should go after and a vast majority feature Noah’s Ark. Why? I dunno. I mean, the ark itself is a giant boat… why not just have him search for the Titanic? Or, gasp, the Heart of the Ocean!

Of course, Indy already found Noah’s Ark in the novel “Indiana Jones and the Genesis Deluge” written by Rob MacGregor in 1992. The story focuses on Indy’s exploits in 1927 and his attempts to find said lost ark before Kremlin agents do. And that’s about it. (Spoiler: he finds the boat hidden beneath a glacier and then, in true Indy fashion, watches it disappear into the sea. Which begs the question: How do Indy’s quests receive funding if he never brings back an actual artifact?)

The biggest issue with the Noah’s Ark plot is the lack of a compelling ticking clock scenario. I suppose you could give special powers to the boat — maybe it’s an invulnerable fortress, or something the bad guys can use to invade other lands, or maybe the Russians just need a really big boat to transport two weapons of every kind across the sea — but otherwise, what would be the point?

Wikipedia calls it a time machine, or antigravity program for a flying saucer… while an article on a website called Gaia (that also features helpful Yoga tips) maintains it was a secret Nazi space program that helped the Germans reach the Moon using an unknown energy source. Sure.

This particular McGuffin might be more appropriate for a Wolfenstein video game or the Overlord sequel we will definitely not get (sad face) — and in point of fact, the device has indeed popped up in Call of Duty: Black Ops as an Easter Egg.

Still, I imagine a fairly dark tale surrounding Indy’s quest for the Bell. Perhaps, Nazi remnants took the device and continued working on it after WWII and plan to use it as a means to restart their conquest. Or maybe the Russians seek out its technology as a way to get a leg up on the space race, only to discover more menacing, supernatural powers. I doubt Disney/LucasFilm goes in this direction, but a clever writer might aptly spin a unique yarn around this plot device.

I saw this idea tossed around on a couple of other lists. At first I thought, “Rubbish.” Because I totally use that word all the time. Along with the word totally. But the more I thought about it, the more I warmed to the idea. After all, Indiana Jones has always toed the line between practicality and the fantastical, and Norse mythology is indeed a religious ideology, albeit in a more whimsical sense. Considering the various legends and myths surrounding Thor and Odin (much of which were covered brilliantly in the recent God of War video game), I could see a scenario in which Indy goes in search of Thor’s hammer and finds something completely different, maybe even supernatural, and ultimately too dangerous for mankind.

Maybe the hammer grants its user super strength, or the ability to traverse dimensions, much like everyone’s favorite Marvel hero. I dunno, but I like this idea. Plus, including Thor’s hammer paves the way for that Indiana Jones-Marvel team up we are all totally dying to see.

Holy Lance, aka Spear of Destiny

I quite like the idea of Indy searching for another artifact directly linked to the tale of Christ. Not only would it tie back into Raiders of the Lost Ark, but it adds a religious element Kingdom of the Crystal Skull sorely lacked. The spear’s bleak history — it was used to pierce the side of Christ while he hung on the cross — allows for the inclusion of the supernatural, i.e. ghosts, spirits, zombies, etc. And given Hitler’s kinda-sorta fascination with this particular McGuffin, so far as legend dictates, it would once again bring Indy back to his Nazi-stomping roots.

Oh wait, Crystal Skull jumped (among other things) the series into a different time period. Ford is 77 (or 18 years older than Sean Connery was when he played Henry Jones, Sr.). Point being: we can’t go back to WWII as the series is currently configured.

So, why not recast the role? Listen, one of the coolest aspects Crystal Skull introduced to Indy’s lore was the idea that he ran around as a secret agent in World War II. Why not bring in a younger actor (say, Chris Pratt) and set the film during this time period? Doing so brings back the Nazis, who were always Indy’s greatest foe (or you could have him deal with Russians and/or Japanese), and keeps Indy firmly entrenched in a bygone era where he belongs — the 50s and 60s are almost too modern for his sensibilities; and force us to see him more as a relic of the past, a fish-out-water, as it were, rather than an ageless explorer. Plus, we return to a young Indiana Jones; and do away with any and all talk of Mutt Williams and Marion Ravenwood-Jones.

A trilogy of Indiana Jones movies set during the events of WWII directed by the guy who made Logan. Seriously, who says no? Hell, you could even cast Ford as an older Jones telling war stories to his grandkids — or something. I like the potential of that series more than another outing with a near-80-year-old man teaming up with some young hotshot explorer who may or may not carry the torch into future films.

But that’s just me. What say you? What McGuffins should Indy seek in his next adventure? Sound off in the comments below.