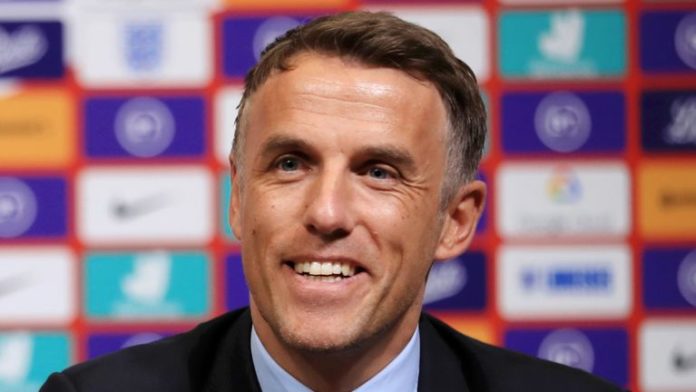 Follow England’s final SheBelieves game against Spain on Wednesday with our live blog on skysports.com; kick-off is at 9.15pm

Phil Neville believes victory over Spain in England’s final SheBelieves Cup game will give his side some much needed momentum going forward.

Having lost the opening game to hosts the US, England stand little hope of retaining the trophy even with a Spanish win with world champions America favourites to beat Japan in the other tournament encounter.

Nevertheless, the England boss is looking at the bigger picture for a squad he readily admits is very much still a work in progress following last summer’s fourth-place World Cup finish.

“At the start of the tournament our aim was to retain the trophy so from that respect it will be disappointing if we didn’t do that,” Phil Neville exclusively told Sky Sports News.

“But six points from the tournament considering we are in transition would be a tremendous effort and give us a bit of momentum.

“It seems too long since we built up a little bit of form and consistency; momentum is really valuable in terms of building team spirit, togetherness and building belief in what we’re trying to do.”

Neville also hinted at making five or six changes for the Dallas showdown on Wednesday evening but insists he will still put out the best team possible against a Spanish side he believes is hugely under-rated.

“Spain are one of the most improved teams in world football, their world ranking does not do them justice,” Neville added.

“They are a top-five team in the world now and their development in terms of technique and physicality makes them a better team than Japan now.

“They ran us close in Swindon last year and I’m excited to see them stepping up.”