Home Sport Superleague Round Four: What to watch 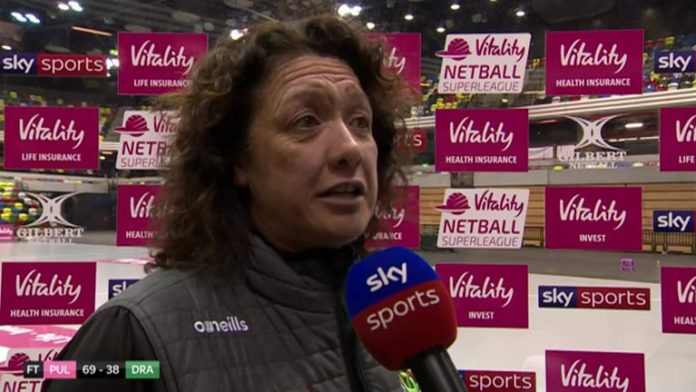 Watch continued coverage of the Superleague on Sky Sports on Monday from 6.45pm when Loughborough host Saracens Mavericks

With Vitality Netball Superleague’s Round Four fixtures continuing to go ahead as scheduled, here’s a look at the key talking points ahead of this next round on court.

In a statement made on Friday, the competition said they are “continuing to follow the national guidance” and that there were no plans to cancel, postpone or change upcoming fixtures.

Fans who are attending Superleague fixtures have been encouraged to follow general advice regarding their conduct and players’ interactions with fans will be limited.

With clubs continuing to prepare for fixtures, here’s what to look out for when they take to court in Round Four…

‘Scoreline swings need to be looked at’

Tamsin Greenway takes a look at an unusual trend that’s emerged over the first three rounds of the Vitality Netball Superleague season.

One unbeaten record will fall…

At Team Bath Arena, two of the competition’s unbeaten sides will bid to keep their unblemished records intact.

The visitors – London Pulse – have impressed with their energy and vivacity so far this season. They’re a far cry away from last year’s woes but this match marks a first meeting with one of last season’s top four.

With the leadership of defenders Halimat Adio and Lindsay Keable, plus the sharp-shooting of Sigi Burger and the energy that Funmi Fadoju brings, Pulse will be keen to highlight that they have the gumption to mix it with the best.

Following a 72-58 victory at the Season Opener, Anna Stembridge’s outfit have been quietly going about their business and Bath have been showing the fluidity and efficiency that she hoped they would.

In pre-season, Stembridge hailed retaining the majority of her squad and it’s clear that their focus on delivering their basics during the pressure moments has paid dividends.

Key match-up – From the very first centre pass of the season, Bath’s captain Kim Commane has driven their work and her encounter with the dynamic Adio will be outstanding. Equally, Summer Artman taking on Burger could be match-defining.

Can Stars deliver for full 60?

After three losses on the trot, Severn Stars are looking to put together a complete game in order to reach the heights that they believe they are capable of.

Georgia Rowe’s perspective ahead of Round Four

It’s been a really hard start, but we have kept positive because when we manage to bring a 60-minute game together, we know we will be unstoppable. The disappointment about the last few games is still there and there’s a lot of regret. But, we’ve had to bin it and move on and most importantly learn from it.

The home side will be eager to make Wasps question themselves early on as Mel Mansfield’s team are arriving off the back of a second defeat in three rounds and a “poor second half”.

“We didn’t respond well to their changes and our changes weren’t as effective as they have been previously,” Mansfield said after their 12-goal loss to Team Bath.

This encounter at Worcester Arena will be decided by which team is able to find, and keep, their composure from start to finish. The experienced players within both teams will need to step up and errors must be kept at a minimum.

Key match-up: As will be the case in Bath, the work of a GK could be vital for her side. Towera Vinkhumbo’s ability to halt the extremely experienced Rachel Dunn will go a long way towards disrupting the visitors’ flow.

From centre pass to centre stage

Five former Vitality Superleague players and one current star are moving from the court to the sidelines and boardroom, leading netball’s move towards professionalism.

Mavs aim for another ‘squad performance’

Following Saracens Mavs’ 61-45 victory over Stars last time out, head coach Kat Ratnapala praised every member of their squad and singled out the work-rate of Gabs Marshall in their mid-court.

As one of the most settled units in the league, they need to make that known to a younger Lightning side as quickly as possible in front of the Sky Sports cameras on Monday evening.

In line with the government and VNSL guidance, our game on Monday vs @SaracensMavs is due to go ahead as planned

Lightning are another Superleague team who experienced great undulations on the scoreboard in Round Three. Losing the last quarter by 21-9 against Thunder, and subsequently missing out on victory after leading, will have been thought to take. However those thoughts must be left in Manchester.

Back at home, Loughborough need to take the positives from pushing the league leaders so hard and continue to navigate their way forwards without captain Natalie Panagarry.

Key match-up: One of the most high-class match-ups of the round will be between Sam May and Kadeen Corbin. Both are exceptional players and Corbin will need to use all of her flair and talent to evade the highly experienced May.

Mikki Austin’s outfit are welcoming the reigning champions to Surrey Sports Park and need to lower their error-count considerably if they want to compete with Thunder.

In Round Three, 21 unforced errors marred their work against Strathclyde Sirens and if they replicate that this week then Karen Greig’s talented squad will punish them.

Last time out Thunder did what great teams have the ability to do and that’s ‘win ugly’. They clawed themselves back from 12 goals down in order to maintain their 100 per cent record.

Winning ugly isn’t fun at the time but most sides will share that it gives you an extra lift after because you know how much better you can be. With a point to prove, the expectation is that Thunder will cause Storm all manner of problems on Saturday evening.

We know Thunder’s calibre and what they are capable of, but ultimately we know they are beatable. They’ve come off the back of a performance against Loughborough where they were given a scare, being down by a double-digit margin at half time. They are not completely invincible.

Dragons eager to re-group against Sirens

After their loss in London, Tania Hoffman highlighted that Dragons are going to go back and look at their processes again.

After a single-match suspension due to a sending off in Round Three, Latanya Wilson should be back in their defensive mix which will be a real boost for a side determined to gain their first win of the season.

Sirens are making the trip down to Sports Wales National Centre boosted by the memories of a determined defensive performance in Round Three.

The combination of Claire Maxwell, Natalie Bright and Zanele Vimbela brought about 26 turnovers. The players will know the importance of building upon a victory as opposed to it being a one-off and in order to do so, their ever-improving shooting statistics must remain.

Key match-up: Gia Abernethy and Sophie Morgan are both excellent mid-court players and their tussle will be outstanding. They both tremendous hands, great engines and will go at each other for the full 60 minutes.