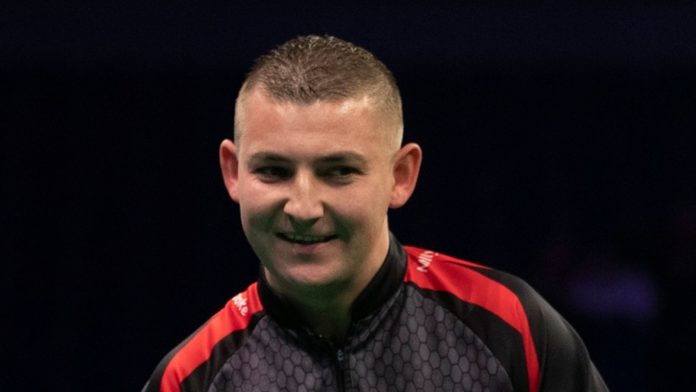 The Premier League star recovered from 4-2 down to seal the win, ending the final with an average of 94 as he reeled off six successive legs – five of which were between 12 and 14 darts.

The last eight is where Aspinall produced his standout victory, beating world No 1 Michael van Gerwen 6-1 to progress to the semi-finals.

Another Dutchman, Danny Noppert, was Aspinall’s next victim as the US Darts Masters champion brushed his opponent aside in a 7-3 win to move in to the final.

Dolan took the early initiative in the decider, moving in to a 4-2 lead before Aspinall fought back superbly to win the title.

The PDC has announced that the 2020 European Darts Grand Prix in Sindelfingen has been rescheduled for May 29-31.

“I played steady at times and not so well at others but I’m really happy,” said Aspinall. “I’m full of confidence and was determined to have a good run this weekend.

“I know what I can produce and I know how good I am and there is no reason why I can’t win more titles.”

Aspinall is currently planning his wedding to partner Kirsty-Louise, and after taking home a second £10,000 cheque of the year he added: “The other half is booking our wedding soon so I need the money!”

A 2nd Pro Tour title of the year for The Asp beating Brendan Dolan 8-4 in the final.

It was also a good day for finalist Brendan Dolan, who moved through the field with some impressive wins.

The Northern Ireland World Cup star began his day with a 6-4 win over Adrian Gray, before going on to defeat Niels Zonneveld, Ciaran Teehan and Dave Chisnall.

A quarter-final win over Derk Telnekes secured a semi-final clash with multiple title winner James Wade, where Dolan was far too good for his English opponent, coming through with a 7-1 win.

Despite a good start in the final Dolan wasn’t able to overcome Aspinall and secure a third title within a year – but the 46-year-old will be pleased with his day’s work.

Wade enjoyed his best run of 2020 so far as he reached the semi-finals alongside Noppert, while Telnekes overcame world champion Peter Wright as he reached his first quarter-final on the PDC ProTour.