Home World How Trump’s presidency has played for Russia 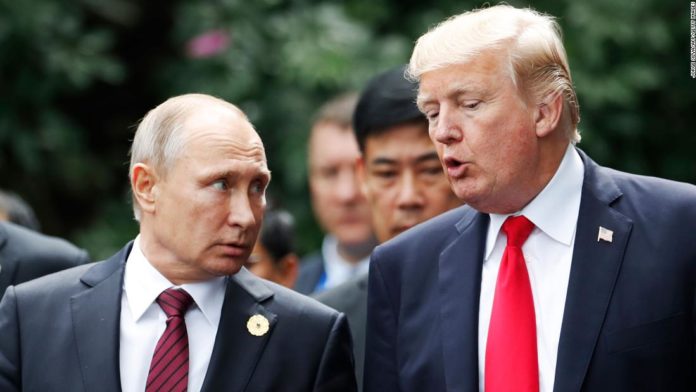 CNN’s Clarissa Ward exclusively reported this week on Russian troll farms based in Ghana and Nigeria working to inflame divisions among Americans and provoke social unrest during the 2020 election. Their activities didn’t specifically promote President Donald Trump’s re-election.
But you don’t need James Bond to recognize the fact that more than any other modern American president, Trump has delivered some of what the Kremlin values most.
The issue has returned to center stage over the last month as intelligence officials update Congress on Russia’s stance toward this year’s campaign. Different intelligence briefers have offered alternative assessments of whether Russia favors Trump for the presidency, as it did in his 2016 battle against Hillary Clinton.
Trump and his aides insist a 2020 bias toward him wouldn’t make sense anyway. “We’ve been very tough on Russia,” national security adviser Robert O’Brien told a television interviewer last month.
In some specific ways, the administration has indeed been “tough.” Trump has imposed new sanctions against Russian misbehavior, though reluctantly and under congressional pressure.
His Pentagon sent two aircraft carrier strike groups into the Mediterranean Sea last year to deter Russian aggression. Trump gave Ukraine lethal aid in its war with Russia.
“If you look at administration policy, it’s not all that bad,” said Steven Pifer, a former US Ambassador to Ukraine, of the Trump administration’s Russia policy.
Yet those steps represent the smaller part of the story.
The larger part is how Trump has advanced what some experts say are Russian President Vladimir Putin’s higher-level objectives: dividing the United States internally, eroding solidarity with European allies, reducing the projection of American power abroad and thereby enhancing the 21st century influence of a diminished Russian state.
Trump, who privately sought a Moscow real estate project as a 2016 candidate, frames his presidential strategy as “America First.” It envisions friendlier relations with Russia as helpful in resolving thorny foreign policy problems while he secures more favorable economic terms from longtime allies.
But Russia policy specialists see important benefits for Moscow.
After winning in 2016, Trump disdained the conclusion of US intelligence agencies that Russia intervened on his behalf. That buttressed Moscow’s attempt to disavow culpability.
Trump has assailed not just Democratic adversaries but also nonpartisan institutions such as the judiciary and the Federal Reserve, eroding public confidence in the American system itself. He has attacked executive branch officials serving under him as a hostile “deep state.” The lagging federal response to the coronavirus highlights the consequences of his governance.
Pressed by one interviewer in 2017 on his expression of respect for Russia’s president, Trump defended Putin by yielding the moral high ground on which his predecessors staked the claim of American exceptionalism.
“You think our country’s so innocent?” he asked.
Steve Hall oversaw US intelligence in countries of the former Soviet Union before retiring from the CIA in 2015 and is a CNN national security analyst. He says Putin wants a weakened US and Trump “is currently the person on the political horizon who does the best job of that for him.”
Trump sapped Western unity by slapping trade tariffs on allies in the name of “national security.” He became the first US President in the 70-year history of the North Atlantic Treaty Organization to cast doubt on America’s commitment to defend member states from outside attacks by Russia or other adversaries.
Trump discusses security commitments in commercial terms, suggesting they remain contingent on financial concessions from allies. Uncertainty about the protective US umbrella rattles allies to Moscow’s benefit.
“Every time the President says, ‘Gee, they haven’t paid 2% and maybe we won’t support them,’ Putin thinks that’s good,” Pifer said. “You measure power in relative terms. This is the advancement of Russian power.”
“If you give Putin the choice — destroy NATO but live with Ukraine getting arms — he’d take it,” added Duke University scholar Peter Feaver, a National Security Council special adviser to President George W. Bush. Trump’s equivocation leaves his subordinates to reassure NATO of American resolve.
Trump’s abrupt announcement of troop withdrawals from Syria last year alarmed even staunch Republican supporters. The decision, Senate Majority Leader Mitch McConnell warned, “would only benefit Russia, Iran and the Assad regime” in Damascus.
And the President undercut his own signature “tough-on-Russia” initiative in the episode that led to his impeachment. He delayed military aid while pressuring a newly elected Ukrainian leader to announce investigations of what he called “corruption.”
One sought negative information about potential Democratic election rival Joe Biden. Another concerned whether Ukraine rather than Russia actually intervened in the 2016 election — a notion Trump’s former National Security Council official Fiona Hill calls a Russian propaganda fiction.
Lately the 2020 landscape Moscow confronts has changed significantly.
Just two weeks ago, the front-runner to oppose Trump was Sen. Bernie Sanders, a self-styled “democratic socialist” who shares Trump’s skepticism about projecting American military power abroad.
Now, Biden’s emergence presents an option more like that in 2016, pitting Trump’s record against a more traditionally adversarial approach to US-Russia relations.