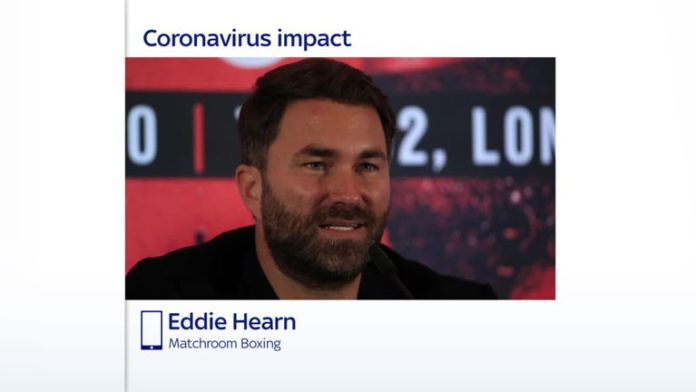 “We do have a potential date for that, but right now, hoping June 20 can remain the date.”

Britain’s unified champion is due to face Pulev at Tottenham Hotspur Stadium on June 20, live on Sky Sports Box Office, and Hearn hopes to retain that date, but is also considering new plans for the massive event after the coronavirus pandemic forced the postponement of bills in March and April.

The Matchroom Boxing boss is waiting for a final ruling on the Premier League fixtures, with Joshua set to appear at the home of Tottenham Football club, but suggested that the fight will still go ahead in Britain.

“A requirement for Anthony in his next fight, a necessity for him was to box in the UK,” said Hearn. “June 20 is a long time away, it’s still in our plans. We have been speaking to Tottenham and making sure that we’re all on the same page.

“We know we have the same strategy moving forward. Obviously the Premier League decision will play a big part in a number of sports. Plans to put new dates in place and that fight as well.

“We also have Dillian Whyte due to fight Povetkin on May 2. We have Derek Chisora due to fight Oleksandr Usyk on May 23. Anthony Joshua, June 20, and all of those events are subject to change right now.

“We hope that they won’t need to be moved, but we also understand this is constantly evolving.

“For the Anthony Joshua fight, already potential plans to move that fight back to July. We do have a potential date for that, but right now, hoping June 20 can remain the date.”

Hearn hopes to ensure that his fighters receive a new fight date, if a show is postponed, but admitted that serious concerns about medical support for events has led to the postponements.

“What the British Boxing Board of Control have said, which makes any event a complete no no, is that we’re not sure that the right doctors and medics can be provided at these events and moreso, if there was an injury at these events, we do not know if they could receive the correct and right medical attention,” he said.

“As soon as that comes into play, it’s not even up for consideration.

“Right now, all of the fighters that have been due to box, do have another date scheduled in for the summer, and we’ve got to make sure we have that in place and hopefully we get back up and running as soon as possible.”

The British Boxing Board of Control has cancelled all public tournaments under its jurisdiction due to the coronavirus pandemic.

The governing body says it has made the decision following the government’s advice on Monday for people to avoid “non-essential” contact, and will review the situation in April.

No Champion bid for Buveur