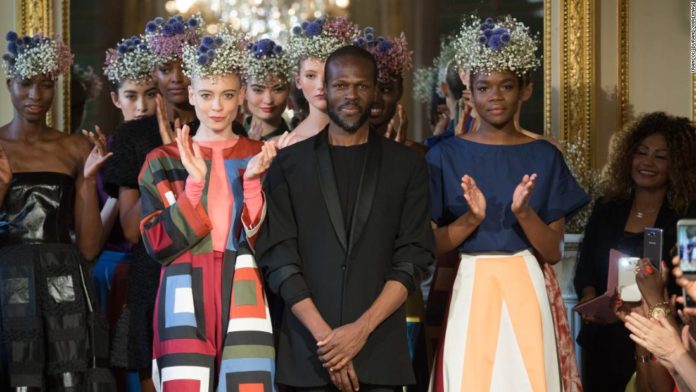 For nearly two decades Cameroonian designer Imane Ayissi has been turning traditional African fabrics into made-to-order womenswear worn by the likes of Zendaya, Angela Bassett and Aissa Maïga. But it was only in January, when he was invited to present his Spring-Summer 2020 collection as a guest member of the Chambre Syndicale de la Haute Couture, that the international press truly took notice of his work.

“There was a lot of buzz,” Ayissi said at his studio in Paris, where he’s based. “People were curious.”

While guest member status doesn’t allow him to use the haute couture label (the application process and requirements for the privilege are rigorous), it does place him in a tier that includes Ralph & Russo, Iris Van Herpen and Zuhair Murad. In an email, a spokesperson for the Fédération de la Haute Couture et de la Mode (the French fashion industry’s governing body) said “his desire to promote (and) to wonderfully transform traditional techniques, and his ingenious way of working on materials hitherto unused in couture clearly played a role in him getting invited.”

For his couture week debut, Ayissi presented a collection titled “Akuma” (“richness” in the Beti language) to express the idea that true wealth depends on what you do with what you have, be it a little or a lot. On the runway, red raffia from Madagascar covered a strappy dress, strips of Ghanaian kente were assembled on a loose coat, and obom tree bark from Cameroon was shaped into petals and appliquéd onto floor-length evening dresses.

“It’s about the relationship you have with material things, and the respect you have for other people,” Ayissi said. “It’s the way you craft a dress that will give it life.”

The son of a boxer and a former Miss Cameroon, Ayissi was a dancer with his home country’s national ballet before he moved to France in the early 1990s to work with the French ballet star Patrick Dupont. He had no formal design training, but caught the fashion bug while modeling for the likes of Dior, Givenchy and Lanvin — the very brands he now shares show schedules with — and started his eponymous line in 2001.

Ayissi admits his early collections weren’t always successful, but he remained patient, gradually improving his knowledge of textiles and tailoring. Today, he’s known for mixing ethically sourced, organic fabrics from African cooperatives with the expected couture materials like silk and taffeta. The shapes are typically simple — all the better to appreciate the craftsmanship and the beauty of the fabrics.

The Fédération de la Haute Couture et de la Mode rejected his applications to show as a guest member twice before he was eventually invited to show, but Ayissi persisted.

“I had to stay true to myself,” Ayissi said. “It takes time to find one’s voice. So I improved my lines, tried to bring new ideas, went further with fabrics, became more audacious.”

Ayissi’s ascent is happening at an important moment for African fashion, as young designers like Thebe Magugu and Kenneth Ize are showing in Paris, and other creatives, such as photographer Kristin-Lee Moolman and stylist Ib Kamara, are building their names internationally.

Jean-Marc Chauve, Ayissi’s longtime friend and his brand’s company manager said they hope to move into ready-to-wear and accessories next, which could make Ayissi’s designs more accessible than ever.

But while the designer is glad to have his work embraced by the European and Asian shoppers who make up the majority of his client base, he would love to see more Africans wearing and embracing his work.

“Some (African) ladies would have the mentality that my clothes are too expensive, but kente is a noble fabric,” Ayssi said. “Let’s not forget African designers have talent, and that their clothes need to be bought.”