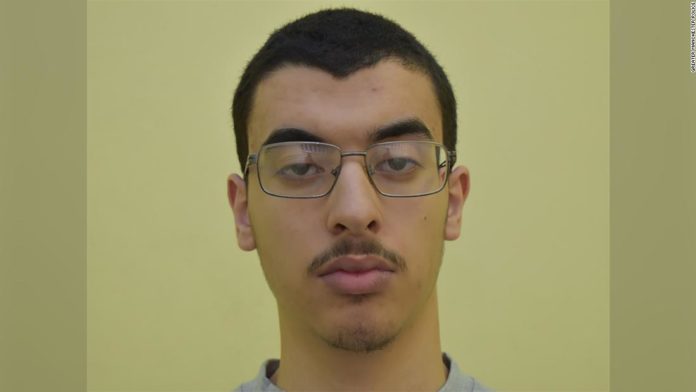 Hashem Abedi was convicted of 22 counts of murder, one of attempted murder, and one of conspiracy to cause an explosion, at the Old Bailey in London on Tuesday.
His older brother, Salman Abedi, detonated a bomb which killed 22 concertgoers and injured hundreds more — many of them children and young people — as they left Manchester Arena in May 2017.
Hashem Abedi, 22, was in Libya at the time of the attack, but was arrested shortly after the bombing and extradited back to the UK in 2019.
During the six week trial, prosecutors said Abedi “encouraged and helped his brother” knowing Salman “planned to commit an atrocity.”
“He has blood on his hands, even if he didn’t detonate the bomb,” Max Hill, the Director of Public Prosecutions, said in a statement after the verdict.

Hashem Abedi was not in court for the verdict, after declining to give evidence and firing his lawyers, according to PA News Agency.
“This verdict will not heal the wounds of the 264 people physically injured in the attack, many of whom have life-changing injuries,” Paul Hett, whose son Martyn was killed in the bombing, said in a statement after the verdict.
“And this verdict will not help over 670 people who suffered psychological trauma after the attack, many still suffering today,” he added.
“But what this verdict will do is give an overwhelming sense of justice to all those affected by this heinous crime.”
Prosecutors presented the jury with a timeline of events in their case against him.

The court heard how Hashem Abedi had asked close acquaintances to buy chemicals, that could be used to make explosives, on his behalf; they said he sourced metal drums to build bomb prototypes; and bought a car used to store the bomb components, according to a statement by Greater Manchester Police.
“Witnesses also gave evidence in court which suggested the brothers had developed an extremist mindset. One witness stated in court that, in his opinion, Hashem ‘believed in terrorism’,” it added.
The brothers traveled to Libya together in April 2017 to see family. Hashem remained in the North African country and Salman returned to the UK in May — collecting components from the car and finishing the construction of the bomb, police said.
“On 22 May 2017, Salman Abedi entered the Manchester Arena and detonated the device that he and Hashem had created, killing himself and 22 other people, and injuring almost 1,000 members of the public,” police wrote.
The two brothers grew up in Manchester with their parents, who had fled Libya under the late Moammar Gadhafi’s regime. Their father, Ramadan, returned to Libya in 2011 after rebels overthrew the government during the wave of protests known as the Arab Spring. His wife joined him in early 2017.