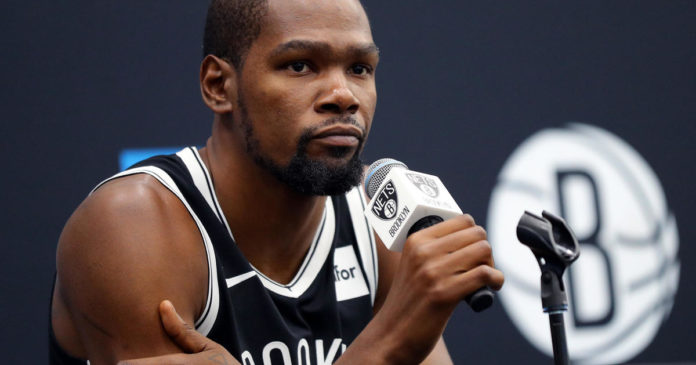 Kevin Durant says in a new interview that he’s among four Brooklyn Nets players to test positive for the coronavirus. “Everyone be careful, take care of yourself and quarantine. We’re going to get through this,” Durant told The Athletic on Tuesday.

The Nets announced Tuesday that four players have tested positive for COVID-19 but they did not identify the players. Only one player is exhibiting symptoms but all four are isolated under the care of team doctors.

Durant, a two-time NBA Finals MVP, has not played this season as he recovers from an Achilles injury he suffered in Game 5 of last year’s championship game.

All players and members of the Nets travel party are being asked to self-isolate. The organization is in the process of notifying anyone who had known contact with the players, including recent opponents.

“The health of our players and staff is of the highest priority to the organization and the team is doing everything within its power to ensure that those affected receive the best care possible,” the team’s statement said. “As always, we appreciate the support of our fans, partners and surrounding community, and we wish all those who are battling this virus a speedy recovery.”

Before Tuesday, Rudy Gobert and Donovan Mitchell of the Utah Jazz tested positive. Christian Wood of the Detroit Pistons had reportedly been diagnosed with the virus.

The NBA is facing an indefinite hiatus as public health officials discourage gatherings of more than 10 people and several cities temporarily close entertainment venues. The basketball community is stepping up to help people in need amid the pandemic.