Home Sport Super League team of the season (so far) 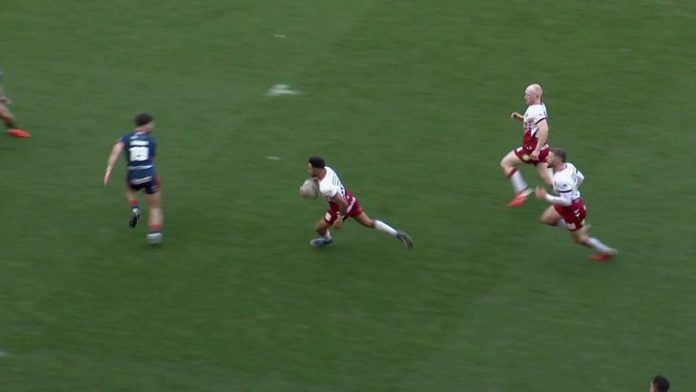 With the Super League season currently suspended, we pick a combined XIII of the players who have impressed during the first seven rounds of the 2020 campaign….

The Wigan full-back has carried on where he left off last year following his arrival at the DW Stadium from Parramatta Eels midway through the 2019 campaign.

French has four tries and four assists to his name so far, helping Wigan establish themselves at the top of Super League prior to the suspension of the season.

The winger has quickly settled into life at Castleford after switching from Salford during the off-season and has already scored six tries in seven appearances for the club this season.

Opherts has also made 757 metres from 109 carries and made seven clean breaks, plus one supported break.

The England Knights centre has been an important attacking outlet for the Wolves so far in 2020, providing five try assists and five passes which have led to tries.

Those have come on the back of King making some significant inroads with the ball in hand too, having made 663 metres from 106 carries, four clean breaks and two supported breaks.

Josh Griffin was a menace with ball in hand against Hull KR ?

No player has made more metres so far in Super League during 2020, with Griffin having clocked up 999 from 107 carries before the season was suspended.

Those have come on the back of nine clean breaks, leading to the 29-year-old scoring two tries and providing three assists as well.

Marshall’s tries have proven vital in helping Wigan establish themselves as the early front-runners in Super League this year, with five to his name so far.

The wily winger has been difficult for opponents to stop with the ball in hand as well, making 14 clean breaks and racking up 891 metres from 94 carries.

The defending champions may have yet to truly hit their stride during 2020, but Lomax has been setting the same standards which have established him as one of the competition’s leading halves.

So far, Lomax has scored two tries, provided six assists and made 609 metres on the back of four clean breaks and one supported break.

Few players have had such a revitalising impact on a club as the former Canberra Raiders scrum-half has on Huddersfield.

Sezer has played a key role in helping last year’s strugglers be among the early high-flyers in 2020, providing six assists and kicking 16 goals from 19 attempts, along with scoring one try.

Millington has been a cornerstone of the Castleford pack since 2012 and his work this year has helped lay the foundations for some eye-catching performances from the team.

The Australian forward has made 546 metres and scored one try with the ball in hand, along with making one clean break, while his efforts in defence have seen him make 170 tackles.

An ever-present danger around the ruck in attack, McShane has made 531 metres from dummy-half scoots alone so far in 2020 – over 150 more than any other player in Super League.

That includes four clean breaks, while in defence the 30-year-old has made 272 tackles with only Hull FC hooker Danny Houghton having made more with 290.

Thompson, who is set to join NRL side Canterbury Bulldogs next year, has kept up the form which saw him rated by some as the best prop in the world last year.

He has scored three tries and made two clean breaks and one supported break on the back of carrying the ball for 667 metres.

Another member of Salford’s Grand Final team who has settled quickly into life with a new club, Jones is having just the impact Hull would have expected from him.

He has carried the ball for a total of 585 metres, produced nine offloads and two assists, not to mention making 138 tackles so far.

Awarded a testimonial this year as recognition for his 10 years of service to Wigan, Farrell has continued to put in the type of performances which have made him a mainstay of the team.

The 29-year-old has scored three tries and provided three assists, made 826 metres from 105 carries and six clean breaks, along with making 261 tackles with a 97 percent success rate.

The 21-year-old recently signed a new three-year contract with the Rhinos after producing several impressive displays for the club so far in the 2020 season.

His statistics underline the impact Smith has made this year, scoring three tries and providing two assists on the back of carrying for 491 metres, plus making 212 tackles.