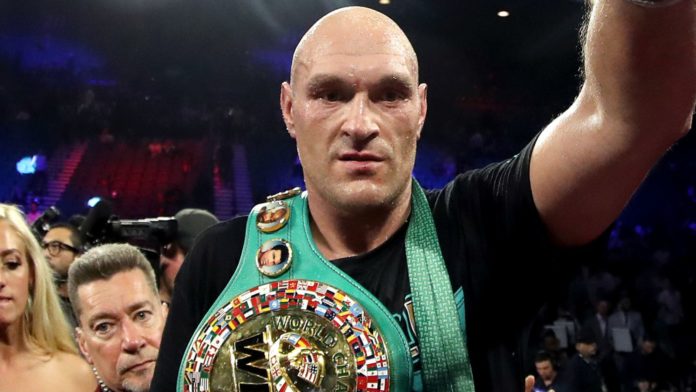 Dillian Whyte should become the WBC heavyweight champion if there is “an issue” with Tyson Fury following fresh claims about his failed drug test in 2015, says promoter Eddie Hearn.

The Mail on Sunday alleged a member of Fury’s team agreed to pay a farmer, Martin Carefoot, £25,000 in return for a signed testimony that Fury failed his 2015 drug test because of eating wild boar.

Fury’s promoter Frank Warren labelled the allegations “outrageous” and said in a statement: “The farmer making these outrageous allegations sent me a letter last October, full of errors and basically telling me he had committed perjury by signing statements under oath and lying.

“When I called him, he asked for money. I told him to clear off and get in contact with UKAD. He chose not to speak to UKAD but instead speak to a newspaper.

“How anybody can take this man seriously is beyond belief. Tyson has never met this man in his life. What a load of rubbish. We’ll leave this with UKAD to look into and don’t expect it to go any further.”

But Matchroom Boxing boss Hearn believes Whyte should be monitoring the situation after his status as WBC mandatory challenger was provisionally suspended by the WBC following claims of an adverse finding in a UKAD drug test.

Whyte’s suspension was lifted by the WBC in December and he was subsequently reinstated as WBC interim champion.

“As I understand, it’s going to be looked into by UKAD,” Hearn told Sky Sports. “I guess the truth will come out in the wash.

“As I understand it, the key witness in the case has come out and effectively changed his statements of what happened.

“I’ll let them deal with that. If I’m Dillian Whyte right now, I’m looking at that situation, knowing that if there is an issue with Tyson Fury as world champion, I become the WBC heavyweight world champion, because right now, he was suspended while an investigation was taking place.

“It’s going to be interesting to see how that plays out.”

WBC president Mauricio Sulaiman told Sky Sports: “The WBC does not act on gossip or media postings, unless a formal claim is presented then The WBC can intervene on any matter, and I’m not referring specifically to this matter about Fury.

“As far as The WBC is concerned, Fury has passed countless tests in the past two years when he has been fighting under The WBC umbrella.

“My personal opinion is that I would question the credibility that such alleged witness has, as he came out and admitted getting money to tell lies!

“Tyson Fury is The WBC heavyweight champion and has absolute support from our organization.”

The Mail on Sunday report alleges Fury’s team offered to pay Carefoot £25,000 to lie about supplying Fury and his cousin Hughie with wild boar and to sign two witness statements confirming that.

The Mail on Sunday report states: “The second included a line that read: ‘I supplied a range of animal meats and offal to Team Fury, including wild boar and pigs’. Carefoot now claims those statements, which are in the possession of The Mail on Sunday, were lies.”

These statements, the Mail on Sunday claims, were then forwarded to UK Anti-Doping investigators via their legal team. It is also alleged that Carefoot has not received the promised payment.

Tyson and Hughie Fury both tested positive for nandrolone after their fights against Christian Hammer and Andriy Rudenko respectively, in April 2015, although they were not charged until June 2016.

A UK Anti-Doping spokesperson told Sky Sports at the weekend: “We will always review any potential evidence in relation to any anti-doping offence, and take investigatory action where necessary.

“If anyone has information that could be of interest to UKAD and its investigations on any matter, we urge them to contact us.”