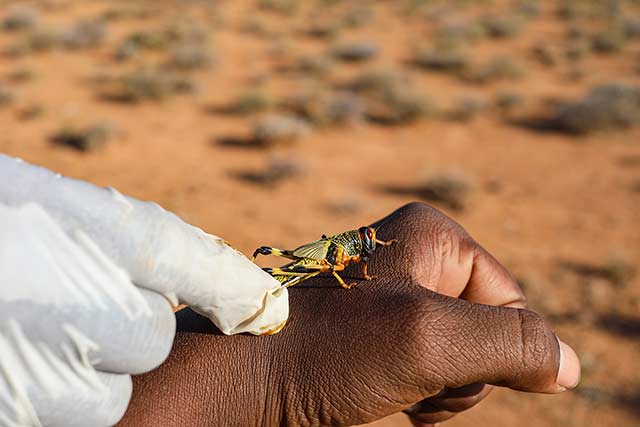 FAO has thanked the government of Sweden for its pledge of $4 million to combat the swarms of crop-devouring desert locusts in East Africa and provide livelihoods support to help affected families weather the crisis. Focusing on Ethiopia and Somalia, the country’s contribution to FAO’s desert locust response will help the UN agency support locust control activities and coordination with other countries, as well as provide livelihoods support to people who have been affected.

“I want to thank Sweden for its generous contribution and for recognizing the urgent need to alleviate the alarming impact of the desert locust upsurge,” said FAO Director-General Dongyu Qu said. “We are working to curb the locusts’ spread but we also need to safeguard livelihoods and promote early recovery.

The outbreak in East Africa is the worst to strike Ethiopia and Somalia for 25 years — for Kenya, in 70 years. Djibouti, Eritrea and Uganda have also been affected. The situation is especially extremely alarming in East Africa, where 20 million people are already considered acutely food insecure. There, the swarms have laid eggs and new immature swarms are starting to hatch, right at the start of the region’s main agricultural season.

Pasture and croplands have already suffered damage, and there are potentially severe consequences for the region where millions rely on agriculture and livestock rearing for their survival. FAO has surged locust experts and other personnel to support governments with surveillance and coordination of locust control activities and technical advice and is procuring supplies and equipment for aerial and ground operations by government control teams.

In Ethiopia, a new FAO-procured high-speed turboprop aircraft has boosted the country’s ability to conduct aerial spraying, making it possible to treat up to 1 500 hectares in one flight. In Somalia, bands of juvenile hopper locusts are being treated with a biopesticide made from a natural fungus, which penetrates the locust’s hard outer layer and starts feeding on the insect, weakening and then eventually killing it – without the use of chemicals.

FAO is also preparing action to protect rural livelihoods by providing affected growers with farming packages, veterinary care for vegetation-starved livestock, and cash for families who have lost their crops so that they can purchase food. The UN agency has appealed for $138 million in urgent funding to assist the countries that have been impacted. So far, around $105 million has been pledged.

FAO and IAEA deepen and broaden their collaboration