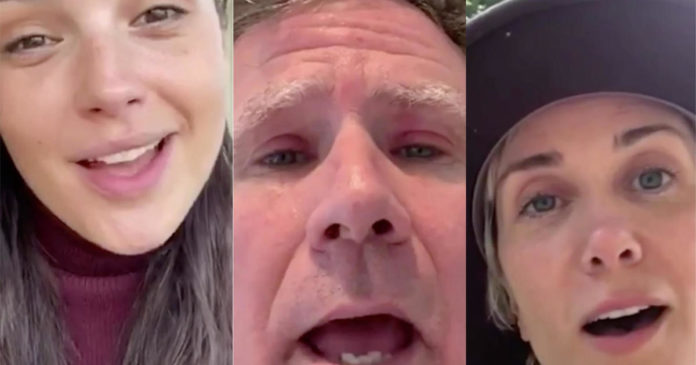 It seems the world is in isolation — together. The coronavirus outbreak has lead to widespread social distancing, and no matter who you are, you’re likely in the same boat. This includes celebrities. Several stars in isolation sang John Lennon’s “Imagine” for a video compilation that is making people feel more together, even when they’re apart.

Gal Gadot shared the montage of singing stars on her Instagram. The “Wonder Woman” actress says in the video that day six of her self-quarantine got her feeling “a bit philosophical.” “This virus has affected the entire world, everyone. Doesn’t matter who you are, where you’re from, we’re all in this together,” she said.

She said what inspired her to make the video was seeing a video from Italy of a man playing “Imagine” on his saxophone from his balcony. “It was so powerful and pure,” Gadot said. Then she started singing the first few bars of “Imagine.” The video was edited together so that each star involved sang a line or two, following Gadot.

“We are in this together, we will get through it together. Let’s imagine together. Sing with us,” Gadot wrote in the caption.

Those participating in the video serenade include two “Bridesmaids” stars. Kristen Wiig and, separately, Chris O’Dowd, who was with his wife, writer Dawn O’Porter, each sang a few bars from their respective quarantines. Annie Mumolo, who co-wrote “Bridesmaids” with Wiig, also took a turn.

In just 16 hours, Gadot’s Instagram video got nearly 4.5 million views. It also inspired people around the world to sing their own version of the song at home and post it on social media. Gadot re-shared some on her Instagram story.

This is just the latest act of solidarity from celebrities during the coronavirus outbreak. Other stars have put on at-home concerts that they live-streamed on social media for their fans at home. Many television personalities, like Stephen Colbert and Jimmy Fallon, are continuing to post content from their homes as well, even if their television shows are not currently able to produce new episodes.