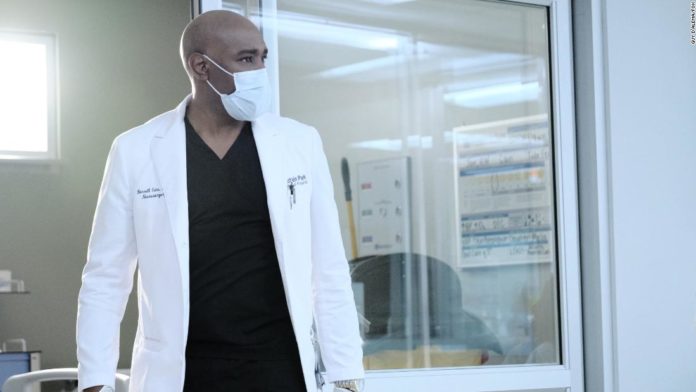 Dr. Karen L. Law, who is the program director of the Internal Medicine Residency Program at Emory University, posted a photo to Instagram on Wednesday showing off a donation of masks, gowns and other supplies made by the team behind the medical drama.
A spokesman for Disney Television Studios, which produces the series, confirmed the donation to CNN.
“To the entire team @theresidentonfox, thank you for this incredibly generous donation of #PPE from your set, including gowns, masks, gloves, and all the things our healthcare workers need to provide safe care for our community during #COVID19,” Law wrote. “Yesterday, I had a serious discussion with the residents about how, though supplies are low, a magical shipment of masks is unlikely to arrive. And yet, a magical shipment of masks DID arrive, in the form of this very generous gesture.”
“The Resident,” now in its third season, is filmed in Atlanta and follows the doctors and staff at the fictional Chastain Park Memorial Hospital.
Other television series have also begun making donations to help first responders.
ABC’s “Grey’s Anatomy” is donating gowns and gloves, and “Station 19,” a firefighter-centric spin-off, has donated some N95 masks to the City of Ontario Fire Dept. and to a firehouse in the Loz Feliz neighborhood in Los Angeles, a spokesperson for ABC Studios told CNN.
“At ‘Station 19,’ we were lucky enough to have about 300 of the coveted N95 masks which we donated to our local fire station. They were tremendously grateful,” “Grey’s Anatomy” and “Station 19” executive producer Krista Vernoff said in a statement to CNN. “At ‘Grey’s Anatomy,’ we have a backstock of gowns and gloves which we are donating as well. We are all overwhelmed with gratitude for our healthcare workers during this incredibly difficult time, and in addition to these donations, we are doing our part to help them by staying home.”
“Grey’s Anatomy” was among the first wave of shows the shut down production last week in response to the pandemic.
“The Good Doctor,”a medical drama filmed in Vancouver, is also working to make a donation locally.
“Filthy Rich,” a satirical dramedy that airs on Fox, will also be making a donation. Though it is not a medical series, the show is planning to make a donation of cleaning supplies and food pallets, a spokesperson for the show told CNN.
“This kind of community support means so much to our #frontlineproviders who are making many sacrifices to staff our hospitals and care for our community,” Law added.
The donations come as hospitals and doctors offices around the country experience supplies shortages as they contend with a growing number of novel coronavirus cases. Some have resorted to making their own equipment.
Top healthcare officials have said that the US does not have enough stockpiled medical equipment — particularly masks, gowns and gloves — to fulfill the anticipated need of nation’s health care system as the pandemic continues.

CNN’s David Williams and Konstantin Toropin contributed to this report.