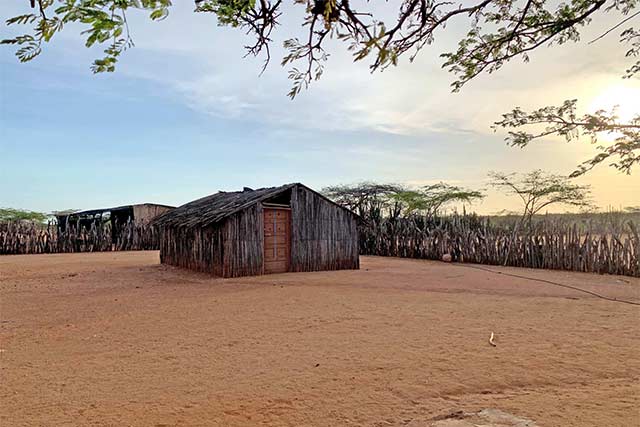 We all woke up at dawn, having slept outdoors. Each of us heard a lot of weird noises during the night. Those who are not accustomed to sleeping in hammocks have spent the night a little more restless than the others, but in the end everything went very well.

While Maira and some people in the community prepare breakfast, we will see the CDC. There’s a tremendous wind blowing and the air is very dry. It’s 6 in the morning and many are already working in the field. Here, I just wish to include some photos that say as much as any word on the achievements of the Early Warning Early Action project in the very difficult context of La Guajira. Water, despite FAO’s support, remains the biggest problem in the area of upper La Guajira.

The nursery with forestry and horticultural varieties is established with a 1.1-m high germinator so that people do not have to duck. It is built with material from the area. The soil is a mixture of small ruminant manure, the quality of which allows for phased planting for continued production. With many of the seeds, they can reproduce what they call vegetative material, such as cabbage. Some of the Creole seeds, which are not of improved variety so there is no degeneration of the second plant, can be saved to form a small seed bank.

At first, they did not believe in the results and did not want to make holes because they did not understand the usefulness. But with the trainings they understood all the advantages of the nursery system, transplanting the germinated seeds in the CDC field, the importance of the drip irrigation system, etc. Tomás, while checking on the production, explains that the beneficiaries in the community have improved, with their own knowledge, many of the techniques they learned, such as for example the varieties that have sown to protect against the wind. They also recycle rubber from car tires to create ropes that serve as tutors or fencing.

It is 7.30 in the morning, the heat begins to be very strong, we finish our tour of the CDC to go to breakfast and try all the delicious things prepared by Maira and the community. Eggplants, tomatoes and cabbage are from CDC production thanks to the work of the community with the support of FAO. I want to end these last days in the Guayabal community with the words of Fidelia Pana. Fidelia is a 61-year-old woman and teacher. She has always lived here in Guayabal and will continue to stay, especially after FAO’s arrival. She has an incredible calm strength.

“One of my daughters has returned, she had moved to Venezuela a few years ago, but with the crisis she returned to the community with her two children. She walked along the border, at first it was difficult because she had nothing, but of course my whole family provided support. And now she’s working with us at the CDC.” She tells me that thanks to FAO, she learned how to sow, to transplant and how to produce organic fertilizer from small ruminant manure. There is no rain here. Complete drought. The drip irrigation system helped to improve a lot. But water is still a major problem.

They have already harvested cabbage, eggplant, chili pepper, in just two months. Fidelia is very happy with the community’s work that has contributed to fostering social cohesion between returnees and the community. They are now able to provide basic veterinary care to animals, thanks to everything they learned from the FAO veterinarian. Also, the feed they were given has helped to improve animals’ body conditions. “We thank FAO, but I’d like FAO to stay with the community because there are still many things to do.” It is us, the visitors, who have to thank them for everything we’ve learned, for their value, for their solidarity and for the humanity.

FAO and IAEA deepen and broaden their collaboration