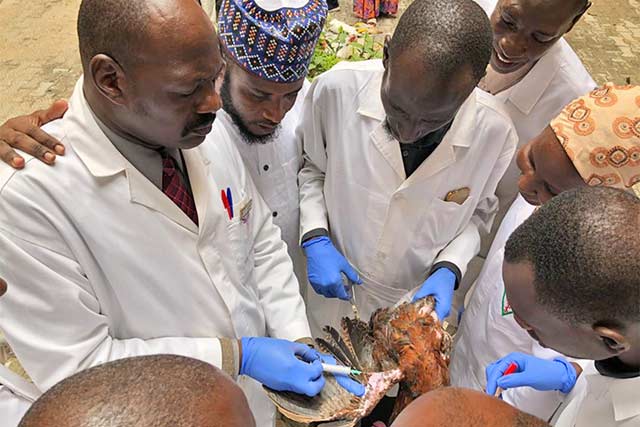 Poultry producers in Nigeria face extreme vulnerability to the highly pathogenic avian influenza (HPAI) H5N1 and H5N8. HPAI, which caused massive poultry losses in 2006, resurfaced in January 2019 and spread quickly to Bauchi, Kano and Plateau States in northern Nigeria. The last HPAI outbreak ravaged the North-West, particularly Kaduna, causing an estimated USD 24 million in losses overall. HPAI viruses affect nearly all birds, including wild and domestic and can spread rapidly in flocks. The viruses result in diseases that cause mortality in nearly 100 percent of cases and typically within 48 hours.

As a response, FAO is building the capacities of local actors through a nation-wide sensitization and training campaign against HPAI in Nigeria, targeting states and private sector animal health workers to detect, control and contain outbreaks. FAO trained, in July 2019, 25 veterinarians from the crisis-affected northeastern states of Adamawa, Borno and Yobe, bringing the total animal health workers capacitated in the country to 200 since the start of the year.

North-East vulnerable due to conflict

In addition, northeastern Nigeria’s institutional capacity to respond to the threat of avian influenza has been weakened by a decade-long insurgency and insecurity. Adamawa, Borno and Yobe’s veterinary infrastructure, including disease surveillance and monitoring systems, as well as outbreak detection and reporting capabilities, have been eroded by conflict. Generally, transport and telecommunications in the three states are likewise impacted, making early reporting and early actions nearly impossible in some areas.

“FAO is working with the state and federal governments to beat back these viruses in Nigeria and Africa in general. With the appropriate training, HPAI and other important diseases will be more easily detected and their outbreaks prevented, now and into the future,” said Suffyan Koroma, FAO Representative in Nigeria.

Global poultry production has skyrocketed in the last few decades, driven by globalization and strong demand. It is estimated that poultry is the most rapidly growing of all livestock sectors. Nigeria is Africa’s largest producer of poultry and the sector accounts for 58 percent of the West African nation’s total livestock production annually. In this this context, HPAI poses significant threats to Africa’s poultry sector given the continent’s porous borders, high levels of informal trade and vulnerable animal healthcare systems.

The Swedish International Development Cooperation Agency and the Government of Germany funded FAO’s training on the HPAI. In June 2019, FAO met with livestock stakeholders in the North-East to develop solutions to issues facing the sector.