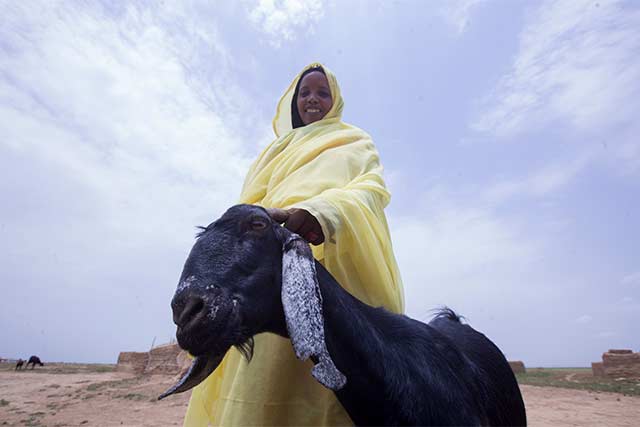 In August 2017, worrying signs began to emerge from Sudan’s Kassala State that communities there were facing trouble: a dry spell had extended far beyond the norm and large numbers of livestock were being driven off traditional grazing routes by their owners in a desperate search for water and something green to feed on. Another alarm bell was triggered when the price of sorghum spiked above average.

Sudan has long been known as one of the most arid countries in Africa, but in recent years, rainfall there has become even more erratic. Extreme events, such as drought, are becoming more common. 70 percent of rural people in Sudan rely on rain-fed agriculture and livestock rearing and for them, the unpredictable and intense conditions, like those detected in Kassala, are stretching their coping capacities to the limits. The cumulative effects of this “new normal” are taking a toll; one drought can follow another, each time stripping away hard-earned but limited resources.

This is why FAO is shifting community mind-sets in Sudan from reactive to one focused on prevention and mitigation. When these troubling signs began to show in Kassala, FAO’s Early Warning Early Action (EWEA) system – established in early 2017 – came into play. This tool uses a plethora of information to anticipate risks, allowing interventions before a crisis becomes a humanitarian disaster. The system for Sudan, designed and implemented in partnership with local and national government counterparts, was tailored to monitor the risk of drought in Kassala, Red Sea and North Darfur states.

The first early action was rolled out in October – a rapid assessment that enabled FAO to understand how people would be affected and which interventions would help farmers the most. The assessment confirmed that pasture was increasingly limited, water supplies were running low and below-average sorghum was harvested. Farmers who owned 3-12 small animals were the most at risk.

With the assessment results, FAO focused on supporting farmers to protect their breeding livestock ahead of the drought. In Hameshkoreb, Tulkouk and Aroma localities, FAO distributed 600 tonnes of concentrated feed, 30 tonnes of mineral licks and provided health treatments to 30 000 animals – benefitting 5 000 families.

Along with other fellow farmers, Tohaj Musa considers herself lucky to have received feed and vaccines in time. “I had been thinking of buying bread to split with my animals to keep them alive,” said Tohaj from Tulkok. Losing her livestock was unthinkable – she relies on them to support her family of ten. However, thanks to the FAO project, Tohaj’s herd actually grew because they were healthy enough to breed despite the dry conditions. “I don’t have to buy milk and travel to the market anymore,” she says.

“Life would be so hard if our livestock died. We wouldn’t have food or milk for the children,” said Khalda Mohammed Ibrahim, a farmer in the Aroma locality. “When it is dry, I am afraid the animals will starve – and then we will too.” Milk matters in these rural areas. Well-nourished animals produce milk full of high-quality protein, fatty acids and micronutrients. Just half a litre per day can give a 5-year-old child, like the young daughter of Khalda, 25 percent of the daily calories and 65 percent of the daily protein they need for healthy growth and development.

In past droughts, Khalda would travel to the Kassala market to buy fodder and sell charcoal. But the journey is long and the goods are expensive. Thankfully, FAO’s early action project was able to keep Khalda’s animals not only alive but also healthy. “With this help, our livestock were healthy and happy and made more milk,” Khalda said. “We could feed the children and ourselves, and sometimes we provided our neighbours with milk.”

Early action means that for every USD 1 that FAO spent, farmers saw benefits of USD 6.7 per household in avoided losses and added benefits – money communities could spend on medicine, food and additional feed. Less animals died, fewer became sick and thin, and milk kept flowing. Acting early before a disaster strikes, is not only possible, it is a responsibility. Communities should have every opportunity to protect themselves and their livelihoods ahead of shocks, so they can be more resilient to future ones. Now is the time change the way we manage disasters to bring us closer to #ZeroHunger.