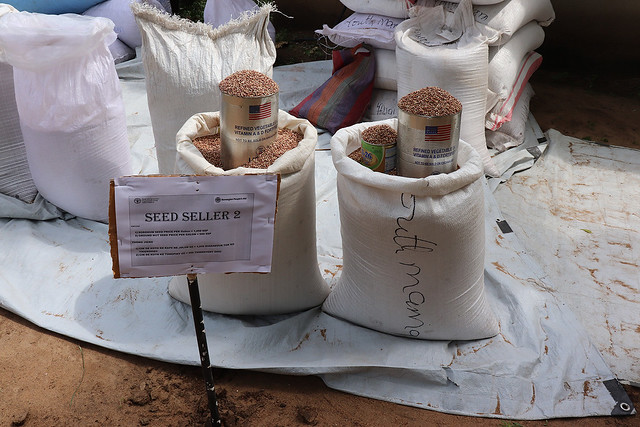 Aren Ngong Gak, a 33-year-old mother of eight, lives in the conflict-affected former Jonglei State of South Sudan. Aren and her family of eleven are entirely dependent on agriculture for their livelihood, like many others in her community. Yet each year during the planting season they struggle to access quality seeds and tools, limiting the quantity of food they can produce and leading to seasonal hunger. According to the latest IPC findings, former Jonglei State has the highest proportion of people estimated to be severely food insecure between May and July 2019, with 73 percent of its population facing Crisis (IPC Phase 3) or worse.

To support these vulnerable communities, FAO is implementing the project “Sustainable agriculture for economic resilience in South Sudan,” with generous funding from the United States Agency for International Development (USAID). The project targets households, communities and agricultural systems in regions facing Stressed (IPC Phase 2) and Crisis (IPC Phase 3) levels of acute food insecurity, with the aim of improving incomes through sustainable increased production and diversified livelihoods, while fostering peaceful co-existence.

In order to restore and strengthen good agricultural production practices, the project supports 416 crop producers’ groups (12 500 households) in three areas – Jonglei, Northern Bahr El Ghazal and Western Equatoria States. This includes training on best agricultural practices and post-harvest management, as well as distributions of  inputs such as seeds, tools and hermetic storage bags. This year the project adopted a two-fold approach: through a voucher system, members of producers’ groups were able to access locally available seeds during seed fairs, while other varieties (maize, cowpea and sesame) and tools were distributed directly to beneficiaries based on their preferences.

Aren and her two-month-old son were among the first to benefit from the seed fair. All beneficiaries received vouchers valued at USD 26, which were exchanged for seeds from local suppliers. FAO tested the seeds prior to selecting the sellers, in order to ensure beneficiaries would have access to the highest quality products.

“I received vouchers that I exchanged for 4 kg of groundnut and 7 kg of sorghum seeds. I will be able to plant these  on 2 feddans (about 1 ha) of land,” said Aren. “This is not the first time I received support from FAO: last year we received crop seeds and tools, and I participated in a training on good agricultural practices where I learned how to plant in a better way. I am very grateful for all the support,” she added.

“Through seed fairs we are helping our beneficiaries to access high quality local varieties of seeds to diversify their production and support access to food all year long. Meanwhile, the increased income for local seed sellers has a positive impact on the local economy,” said Paulina Prasuła, an FAO Project Specialist. “Greater and more diverse agricultural yields will allow these farming communities to become more resilient to shocks that threaten their production and food security,” she added.