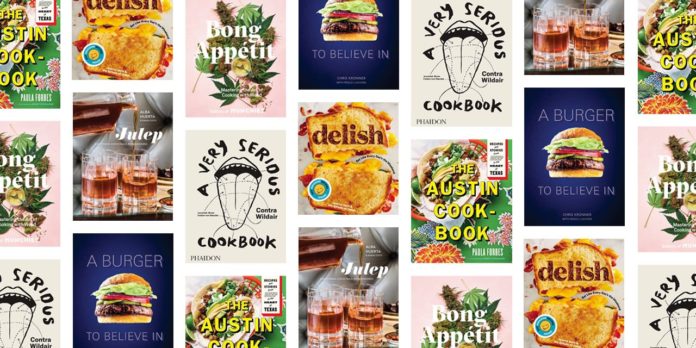 This year, like any year, hundreds of cookbooks covering every corner of food culture hit the market to feed the hungry hoards. But beyond books hawking vegan-made-easy recipes and weight loss advice, we’re looking for the real gems, the ones you’ll actually want to buy for your kitchen. Or at the very least, display on your coffee table. From burger bibles to refugee stories to beef jerky testaments, here are our 20 favorite cookbooks from 2018 (so far).

Matty Matheson is going to tell you about his entire life—all of it in hilarious, intimate detail—and he’s going to do it through food. There’s the Bologna Bowl he learned to make at his high school girlfriend’s house; she’s now his wife. There’s the French Onion soup he mastered at the first restaurant he worked in, after he dropped out of culinary school with only three weeks to graduation; he wanted to go on a road trip across Canada in a van instead. And there’s the P&L; Cheeseburger, the burger that made him famous; he really fucking hates it, but then again, it makes people happy. Matheson combines personal essay with cooking instruction to make one hell of a read. Plus, you can’t beat that cover.

The Bread and Salt Between Us

By Mayada Anjari with Jennifer Sit

Anjari and her family fled Syria’s civil war and ended up in Jersey City by way of Jordan, where members of the Rutgers Presbyterian Church welcomed them to America. In gratitude, Anjari prepared a meal for the church in her new home. Then, she cooked for a church fundraiser. Now, five years after leaving her country, she has a cookbook, the money from which will help her family and other refugees. The recipes are accessible, accompanied with explanations of Syrian cuisine. They tell Anjari’s story, which is the story of many.

Bong Appétit: Mastering the Art of Cooking with Weed

By the Editors of Munchies

It’s about time you graduated from month-old sugar cookie edibles. With Bong Appétit, you’ll have THC-friendly cocktails, appetizers, the main course, and dessert covered—responsibly, of course. A tip before you dive in: Study up on the dosing. You want to be able to eat one serving of Green Mac and Cheese, not one spoonful. No worries, Bong Appétit walks you through the ins and outs of cooking with marijuana.

Chrissy Teigen has let us into her personal life, giving all the world intimate insight on how she does motherhood, marriage, and more. And somehow, this giant overshare is exactly perfect, because she is exactly perfect—on Twitter and otherwise. Her cookbook, full of delectable recipes (including, yes, the banana bread and lots of Thai-inspired dishes), is like having a friend in the kitchen who’s also a great storyteller.

A Very Serious Cookbook is not so serious. But it is a diary of sorts of a pair of New York’s best restaurants, where natural wine, friendship, and innovative recipes reign. You’ll laugh, you’ll reminisce about all the damn good meals you’ve prepared in your life, and you’ll be inspired.

The Noma Guide to Fermentation

By René Redzepi and David Zilber

If you know what Noma is and you have an interest in fermenting your food, well, this is your bible. For the most intense of foodies, Redzepi’s house of fermentation in Copenhagen is ground zero for creating living food flavors at the microorganic level. His cookbook is a tome, but a beautiful and thorough one at that.

Austin is where tradition meets hype, where foodies dine alongside grill masters who learned the trade from their fathers’ fathers. Whether you’re a SXSW regular or Franklin Barbecue acolyte, Forbes’ book—divided into Tex-Mex, tacos, and barbecue sections—is your window into Austin cuisine.

A Burger to Believe In

By Chris Kronner with Paolo Lucchesi

Kronner of the now-closed KronnerBurger chases the American dream of the perfect burger through cooking tips, toppings guides, and more than 40 side dishes, from homemade steak fries to vegan chopped salad. It’s a dream we can get behind.

By Joanna Saltz & the Editors of Delish

Pigs in a quilt. Crack chicken. Quesadilla burgers. These and more sinfully good recipes are packed into Delish’s first cookbook. It’s a colorful, mouth-watering ode to food courtesy of people who want to make cooking fun, not formidable. To all of you on diets: Consider yourselves warned.

Diaz, who moved to Atlanta from Puerto Rico as a child and back to Puerto Rico as an adult, wrote a book that is part memoir, part cooking instructor, and fully wonderful—especially now, when we could all stand to learn a little more of Puerto Rico.

By Michael Hyams and Liz O’Keefe

Every way to grill, sauté, and bake nature’s most versatile fungus is presented here alongside beautiful photography, with not a magic shroom among them.

Between Harlem and Heaven

By JJ Johnson and Alexander Smalls with Veronica Chambers

By tracing the African diaspora through Asia and the Americas, all the way to Harlem, this book is a guide to centuries of multicultural cuisine, decades of jazz, and years of experience from two of the borough’s most renowned chefs.

Do like the Swedes and introduce “lagom,” or balance and harmony, into your kitchen. It wouldn’t be the first time we turned to Scandinavia for wholesome lifestyle pointers.

By Alba Huerta and Mariah Stets

Heavy on the Southern storytelling and even heavier on the bourbon, Huerta’s book is a history of drinking in the states where the sun always shines.

By Taylor Boetticher and Toponia Miller

Any of the jerky recipes in this cookbook from the charcuteriers at the Fatted Calf outshine your regular gas station fare, no contest. Go ahead, give making your own a go.

Following the opening of his new BBQ joint Mabel’s in Cleveland, celeb chef Symon samples grilling techniques from Tennessee to Texas for his new book.

By Bill Kim with Chandra Ram

All it takes are seven master sauces (recipes provided) and a grill (that one’s on you) to cook meat that rivals the flavor of traditional Korean barbecue.

By André and Tenaya Darlington

Listening to the entire Rise and Fall of Ziggy Stardust LP, side A then side B, would be that much better with a perfectly paired cocktail. Purple Rain, too. Booze & Vinyl goes in deep on years of classic music with drink recipes to match.

Sarah Rense Sarah Rense is the Associate Lifestyle Editor at Esquire, where she covers tech, food, drink, home, and more.